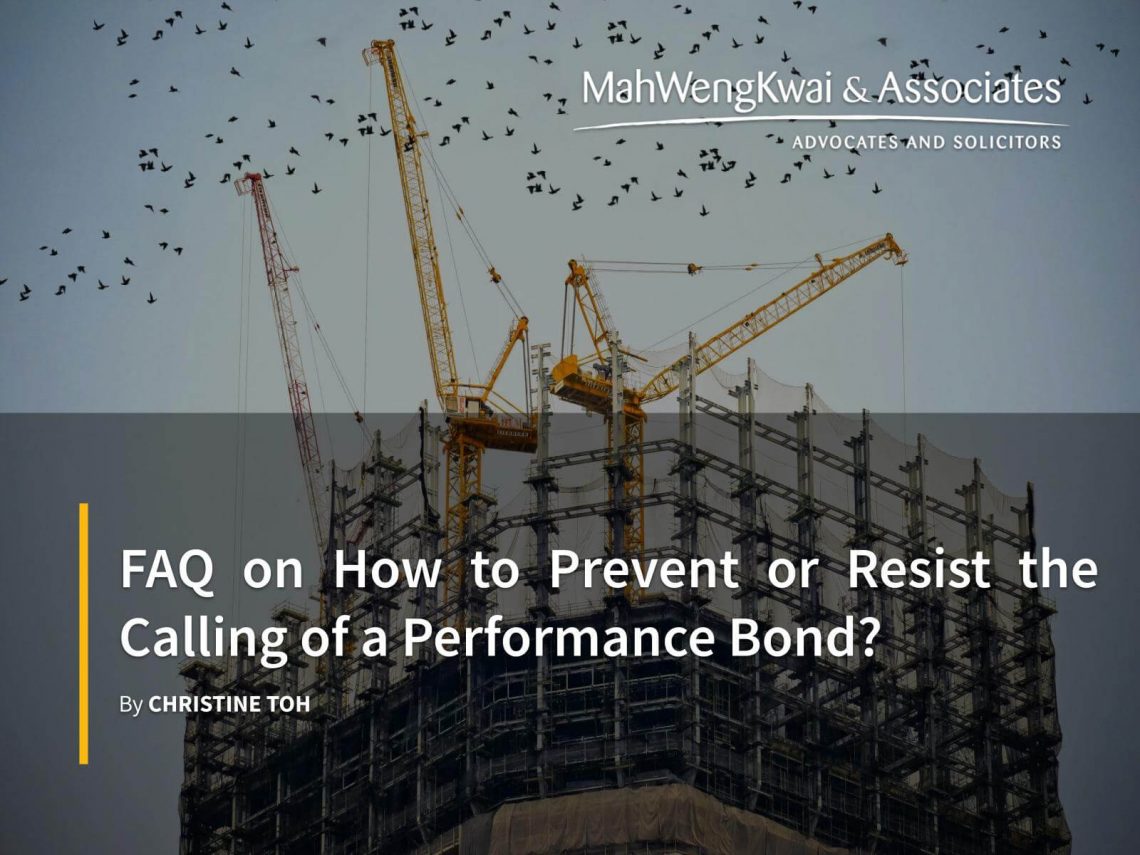 Most if not all construction contracts impose a mandatory obligation on the contractor to furnish to its employer a performance bond to guarantee the performance of the contract.

We have previously published an article titled Performance Bonds and Bank Guarantees – Interpretations and Demands which explores the various interpretations of performance bonds and the requirements of a valid demand. This article answers frequently asked questions on how to prevent/resist a call on a performance bond in the construction industry.

1.  What should I do if the beneficiary calls on the performance bond?

You may apply for an injunction from the Malaysian courts if you wish to resist the calling on the performance bond.

2.  How does an injunction help?

An injunction is a judicial order from the courts to prevent a party from doing an act or to compel a party to do an act.

In this case, the court may, if your application for an injunction against the call of a performance bond is allowed, order that:

3.  How quickly can an injunction be applied for and obtained?

In very urgent circumstances, an injunction application can be prepared by solicitors within a matter of days. However, it is best to seek the advice of and appoint solicitors as early as possible, and as soon as and a dispute of the calling of a performance bond is anticipated.
An application for an interim injunction can be filed on an ex-parte basis together with a certificate of urgency in order to obtain an urgent hearing date, possibly within a matter of days. An interim injunction is intended to hold the status quo pending the final determination of the suit between the parties. An ex-parte hearing is one which is heard on an urgent basis without full arguments being presented by the opposing parties. An ex-parte injunction given under Order 29 Rule 1 of the Rules of Court 2012 is only valid for 21 days and may be extended at the discretion of the court until the inter-partes hearing of the interim injunction.

4.  How do the Malaysian Courts approach an application for an injunction to restrain the calling of a performance bond?

Generally, the courts are slow to interfere with a beneficiary’s call on the performance bond as the court recognizes that “in the world of commerce, trustworthiness is a byword for doing business and a performance bond thus plays a crucial role causing more business to be formed and to be transacted.”

It is only in “exceptional cases that the courts will interfere with the machinery of irrevocable obligations assumed by banks. – See Esso Petroleum Malaysia Inc v Kago Petroleum Sdn Bhd [1995]1 MLJ 149

5.  Under what circumstances will the courts allow an application for an injunction to restrain the calling of a performance bond?

The courts do recognise that the rigidity of the autonomy principle between the beneficiary and the bank may result in injustice. Hence, the courts have allowed injunction applications to restrain the calling of a performance bond in situations where there is fraud or unconscionable conduct even where there is a valid demand issued by a beneficiary.

On what amounts to a valid demand, please read our article: “Performance Bonds and Bank Guarantees – Interpretations and Demands”.

7.  How can the allegation of fraud be relied on in an application to restrain the calling of a performance bond?

Firstly, the allegation of fraud must be specifically pleaded in the application for an injunction to restrain the calling of a performance bond. Supporting details must be given as the mere allegation or suspicion of fraud is not sufficient. (LEC Contractors (M) Sdn Bhd (formerly known as Lotteworld Engineering & Construction Sdn Bhd) v Castle Inn Sdn Bhd & Anor [2000] 3 MLJ 339)

Another important element in the fraud exception is that the bank must have notice of the alleged fraud. (Esso Petroleum Malaysia Inc v Kago Petroleum Sdn Bhd [1995]1 MLJ 149)

Unconscionability arises “where events or conduct are of such degree such as to prick the conscience of a reasonable and sensible man.” – Kejuruteraan Bintai Kindenko Sdn Bhd v Nam Fatt Construction Sdn Bhd [2011] 7 CLJ 442

It is not possible to list or categorise what amounts to unconscionability as it all depends on the facts of each case. Generally, it involves an element of unfairness on the call on the performance bond which compels the Courts to restrain the call. (Sumatec Engineering and Min Thai Holdings Pte Ltd v Suniable Pte Ltd & Anor [1999] 2 SLR 368)

Essentially, the unconscionability exception can be relied on when there is a lack of good faith that results in a very distinct bias and unfairness to the other party.

9.  What is the difference between establishing fraud and unconscionability?

The court in LEC Contractors held that “unconscionable conduct or bad faith by itself is not fraud”.

As such, it is more common to see parties succeeding in their injunction application on a ground of unconscionability instead of relying on the exception of fraud.

The illustrations below are decided court cases involving injunction applications to prevent or resist the calling of performance bonds. These cases demonstrate the court’s approach on the issues of fraud or unconscionability. Not all these cases were successful (Sumatec). In the cases which were successful, the courts looked into the facts and decided on the questions of fraud and unconscionability accordingly (Esso Petroleum, Bina Jaya Mantap and Dunggon Jaya).

It was an agreed term between the parties that Esso was entitled to make deductions from the payment due to Kago if the latter failed to deliver the material within the scheduled delivery period. However, Esso agreed to refund these deductions to Kago in the event the “cost impact” of the delay was found to be less or none after Esso ascertained such cost impact.

However, the ascertainment of the refund could take time and Esso agreed to release the deductions made in exchange for two performance bonds issued by Bank Bumiputra Malaysia Bhd (“Bank”).

Subsequently, Esso ascertained the cost impact of the delay came to 90% of the sum released and requested the payment of the sum within 7 days. In response, Kago wrote to Esso requesting the particulars justifying the claim of the said 90%. Without replying to Kago’s request, Esso called on the performance bond. Kago rushed to the court and obtained an ex parte injunction restraining Esso from receiving any monies under the performance bond.

Injunction Against the Beneficiary

The Supreme Court held that the principles laid down in American Cynamid v Ethicon [1975] AC 396 apply to all interlocutory injunctions.

(b)  Balance of convenience – The court took notice of Kago’s previous request to release the deductions in exchange for a bank guarantee. It drew an inference that Kago had a liquidity problem. Kago’s liquidity problem created some doubt as to whether Kago could pay the damages suffered by Esso if it was later found that the injunction was wrongly granted. On the other hand, Esso, being owned by the world’s largest multinational companies, would be able to pay damages to Kago if it was later found that Esso breached the contract terms. On that score, the Supreme Court held that the balance of convenience tipped heavily against Kago.

Applying the principles laid down in American Cynamid, the Supreme Court allowed Esso’s appeal and set aside the interlocutory injunction restraining the making of a call on the performance bonds.

Injunction Against the Issuer Bank

11.  In Sumatec Engineering and Construction Sdn Bhd v Malaysian Refining Co Sdn Bhd [2012] 4 MLJ 1, the Federal Court looked beyond the fraud exception and held that unconscionability was a separate and independent ground to allow for a restraining order on the beneficiary.

Sumatec Engineering and Construction Sdn Bhd (“Sumatec”) was appointed by Malaysian Refining Co Sdn Bhd (“MRC”) to be its contractor for the design, supply, fabrication and erection of structural steel for the Melaka Refinery PSR-2 Revamp Project at Sungei Udang, Melaka. The original contract price was RM47 million.

Sumatec furnished a bank guarantee as per the contract terms in favour of MRC in the sum of RM4.7 million (10% of the original contract price). The bank guarantee was to be valid until three months after the expiry of the warranty period, which in turn was twelve months after the date of provisional acceptance of the works as certified by issue of a provisional acceptance certificate (“PAC”).

Sumatec was required to complete the works by 31.5.2009. PAC was issued confirming that Sumatec’s contractual works had been carried out and completed as of 31.5.2009. Parties were in the midst of negotiation to finalise the final account between the parties. On 1.6.2010, Sumatec was informed by the bank that MRC had made a demand for payment of the bank guarantee.

Sumatec contended that the following events had transpired:

(a)  Delay – Progress of works was severely hindered by MRC’s delay in furnishing the complete drawings;

(b)  Significant omissions – MRC removed a significant portion of Sumatec’s original scope of work, the contract sum was reduced from RM47 million to about RM13 million only. The bank guarantee for RM4.7 million issued remained in force notwithstanding this variation in the total value of works;

(c)  Completion of work – By 31.5.2009, Sumatec duly completed all works under the reduced scope of work. PAC was issued confirming that Sumatec’s contractual works had been carried out and completed as of 31.5.2009;

(d)  Back-charges – Sumatec submitted 2 claims for unpaid work done upon completion of works. In response, MRC introduced back-charges. Before Sumatec’s claims, MRC did not give any notice of defects to Sumatec.

It was BJM’s contention that early into the contract, it was extremely difficult to work with the Petronas’ representatives. BJM alleged that there was a pattern to the impediments or antagonising treatment by Petronas making it unbearable for BJM to carry on. BJM construed these actions and conduct of Petronas as amounting to a fundamental breach and repudiation of the contract which BJM accepted.

The High Court also found that the contention that a request for a bribe was made known to Petronas early in the contract by way of BJM’s letter of termination dated 28.5.2013. Following thereof, BJM requested the return of the performance bond in its letter dated 30.5.2013.

However, Petronas did not respond to any of the letters immediately. The High Court observed that Petronas’ conduct post BJM’s letter of termination dated 28.5.2013 gives room for the allegation that it is unconscionable for the defendant to have made that call.

The High Court held that there was lingering doubt of the events, differences and disputes between the parties, which enough to prick the conscience of a reasonable and sensible man as to the conscionability of the defendants call on the bank guarantee. Under the circumstances, BJM’s application to restrain the calling of the performance bond by Petronas was allowed.

Dunggon Jaya applied to court for an injunction to restrain Aeropad from calling the bank guarantee. The High Court disallowed Dunggon Jaya’s application. On appeal, the High Court’s decision was reversed and the Court of Appeal held that Aeropad was guilty of unconscionable conduct.

The Court of Appeal took the position that Aeropad had “engineered a situation to unfairly avoid making payment of sums due and owing to the (Dunggon Jaya)”. Some examples of events identified by the Court of Appeal were the failure to certify additional work done, wrongful deduction, under certifications, etc.

The Court of Appeal found a series of events where taken cumulatively amounts to the conduct of such a degree as to prick the conscience of a reasonable and sensible man. Under the circumstances, Dunggon Jaya’s application for injunction was allowed.

The allegations of fraud and unconscionability are fact-specific and fact-sensitive. In deciding if a call on a performance bond is lawful or otherwise, the court will undertake a full and proper evaluation of the relevant facts and circumstances of the case as a whole.