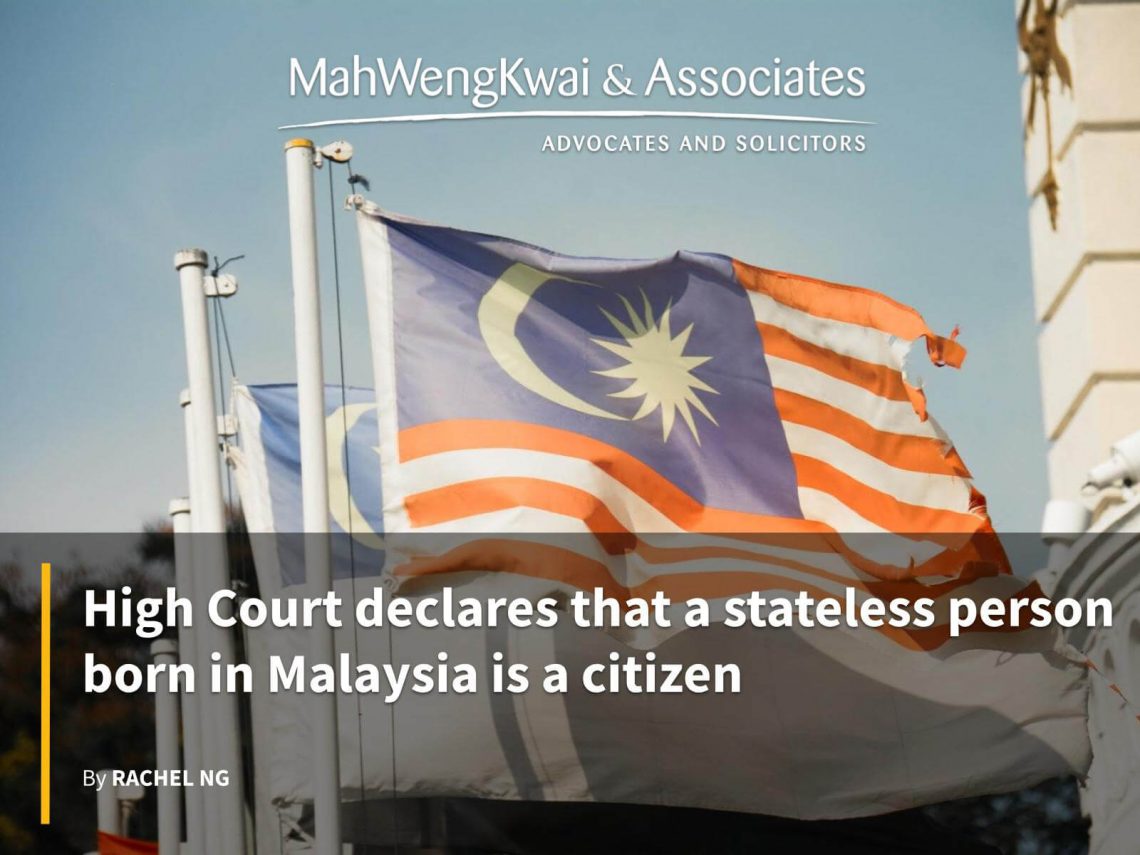 The Kuala Lumpur High Court on 10.2.2022 declared that a person, who was born in Malaysia to a Malaysian father and a non-Malaysian mother who were not married at the time of birth, is a citizen by operation of law. Our Ms Jasmine Wong and Ms Rachel Ng successfully represented 24-year-old Ridzuwan Mohammad Napolean (“Plaintiff”) who had been refused citizenship by the Malaysian authorities and who had been left stateless in the East Malaysian state of Sarawak.

The relevant facts of this case are as follows:

The main issue in this case was whether the Plaintiff, who was born in Malaysia to a Malaysian father and a non-Malaysian mother who were not married at the time of birth, is a citizen by operation of law.

On 11.6.2021, the Plaintiff filed a suit in the High Court to obtain a declaration of citizenship by operation of law pursuant to Article 14(1)(b) read with Part II Section 1(a) and Section 1(e) read with Section 2(3) Second Schedule of the Federal Constitution:

1.  Subject to the provisions of Part III of this Constitution, the following persons born on or after Malaysia Day are citizens by operation of law, that is to say:

(e) every person born within the Federation who is not born a citizen of any country otherwise than by virtue of this paragraph.

2(3) For the purposes of paragraph (e) of section 1 a person is to be treated as having at birth any citizenship which he acquires within one year afterwards by virtue of any provisions corresponding to paragraph (c) of that section or otherwise.

Submissions in the High Court

The case was heard on 10.2.2022 at the Kuala Lumpur High Court. During the Hearing, our Ms Jasmine Wong, on behalf of the Plaintiff, submitted that the Federal Constitution was drafted to prevent statelessness in Malaysia. If it is shown that the Plaintiff did not acquire citizenship of any country, the Plaintiff would be rendered stateless and that would be contrary to the intention of Parliament.

Further, based on our legislative history, the Parliament had intended for a person to be a citizen if either one of his parents is a citizen. The Parliament did not intend to differentiate between a father and a mother, nor did Parliament intend for a person’s right to citizenship to be affected by the parents’ marital status.

This decision is a positive change in the development of Malaysian citizenship law. Our lawyers at MahWengKwai & Associates take the position that a person’s right to citizenship is linked to his/her right to life and equality. We welcome this High Court decision which recognises the right of an individual to be a citizen by operation of law as long as the person was born in Malaysia and the person was born to at least one parent who is a Malaysian citizen. With this decision, the Plaintiff is no longer stateless and his right to citizenship is protected. This is consistent with the intention of the drafters of our Federal Constitution.

This article has been prepared and published with the consent of the Plaintiff.