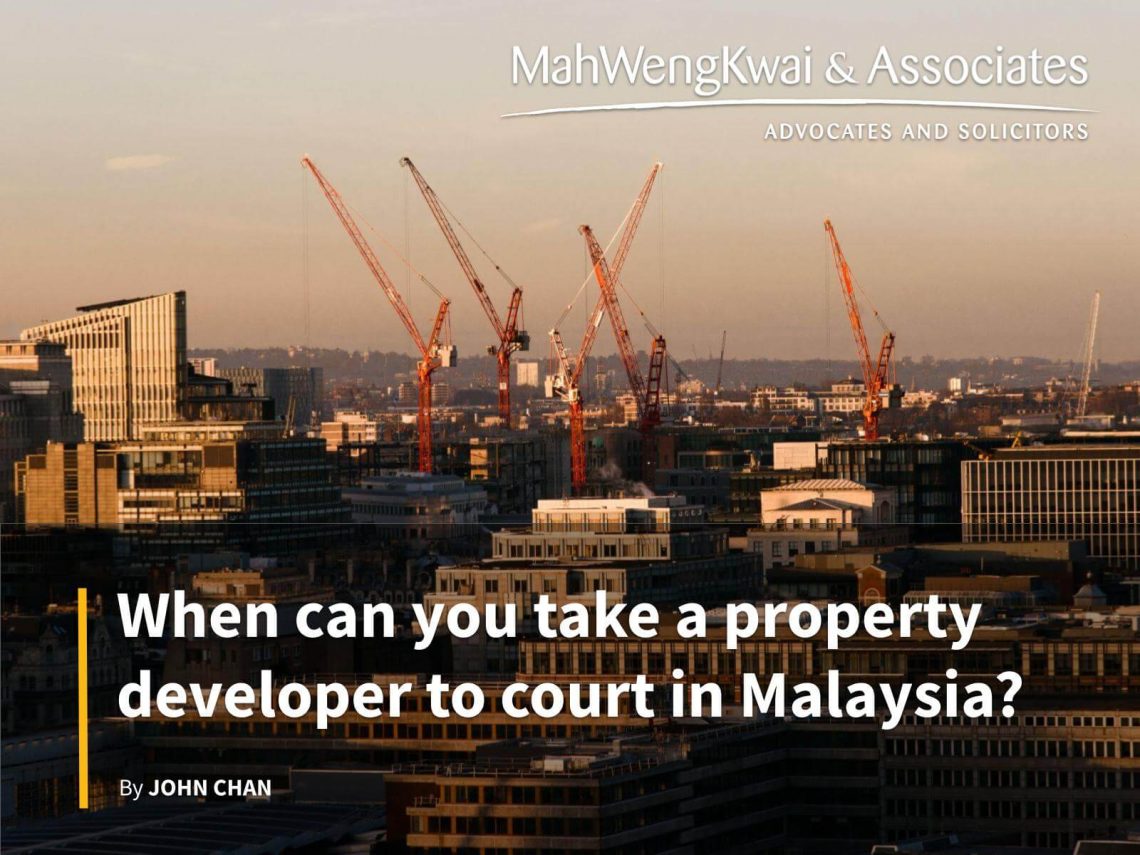 Our partner, John Chan, was recently interviewed by iProperty.com.my for the article titled “When can you take a property developer to court in Malaysia?”

In the article, John shared his views on a variety of issues including the grounds in which a buyer can take legal action against the developer, the steps that can be taken by a buyer if the buyer’s housing development is categorized as a “sick” property and the best way to approach a civil suit involving a developer.

You can read the full text of the article below.

Over the years, there have been cases of frustrated buyers not getting their unit as what was promised in the SPA, or even not getting it at all when a developer falls behind schedule or goes bust. Many buyers are not aware of their legal rights and what avenues are available to them.

Should a property developer fail to carry out his responsibilities and duty of care as laid out in the HDA, homebuyers may consider taking legal action. Taking someone to court is serious business and usually means that one party has exhausted all means to get the other party to do what is expected of them. Going to court not only takes up a lot of time and energy but also requires financial resources. However, if the stakes are high, it is something that would be worth doing.

We speak to John Chan, Partner at MahWengKwai & Associates, for advice on when a buyer can take legal action against a developer.

On what grounds can you take legal action against your developer?

1. Non-delivery or late delivery of vacant possession of your purchased property

Under the HDA, a developer must deliver the vacant possession of the property to buyers within a stipulated time: 24 months for landed homes with an individual title or 36 months for strata-titled properties. Buyers can take legal action if the property is not delivered within this time frame.

2. Defects and latent defects to your property

When you purchase a new property, the property developer is required under the HDA to fix any defects which pop up in the property within 24 months from the delivery of vacant possession. This “warranty” period is known as the defect liability period or DLP. Defects include, but are not limited to, uneven tiles, paint cracks, scratched windows, leaking pipes, and bad workmanship. Latent defects, on the other hand, are defects that cannot be seen and will usually manifest themselves over time. More often than not, these latent defects will appear after the 24-month DLP period. Examples of latent defects are improper foundation works that cause sinking of soil, and cracks on walls due to substandard material used.

3. Property delivered not in compliance with the specifications provided in the SPA

The developer needs to deliver the housing unit exactly as specified in the Sale and Purchase Agreement (SPA). For example, the buyer can take legal action if there are only two bathrooms in the unit when the SPA specifies three bathrooms.

4. Failure to apply for the subdivision and strata titles of the project within time pursuant to the Strata Titles Act 1985

A strata title is a title issued for stratified properties such as condominiums and apartments. Developers have to apply for a strata title for the purchasers and the application can be done once the construction of the superstructure (the frame, walls and floors) has been completed. Under the Strata Titles Act 2013, the developer must apply for a Certificate of Proposed Strata Plan (CPSP) from the Department of Survey and Mapping Malaysia (JUPEM)’s Director of Survey. The application for strata titles has to be done within one month of the issuance of CPSP.

5. Failure to transfer the individual strata title for your property to you

What can you do if your housing development is postponed or categorised as a “sick” property?

The Ministry of Housing and Local Government (KPKT) categorises a housing development as a ‘sick property project’ when the construction progress is delayed by more than 30% when compared to its scheduled progress or upon the SPA expiry/lapse of vacant possession.

A “sick” property could eventually lead to the housing development being abandoned before completion. Homebuyers will suffer because they will have to continue servicing their home loans and may never ever see their “new” property. According to KPKT – as of 7 July 2022, there are 239 property developers in Malaysia with abandoned housing developments

In summary, when a property development company is wound up, a liquidator is appointed to step into the shoes of the developer to perform the duties and functions of the developer, including completing the construction of the development, delivering vacant possession and applying for individual strata titles.

In the case of a delayed development, the buyer may bring a claim against the developer for LAD at the Tribunal for Home Buyers Claims or Court.

In the case of an abandoned development by an insolvent developer, the buyer may theoretically file a claim against the developer for termination and refund of the purchase price due to a breach of the sale and purchase agreement. However, in practice, buyers would have to wait a long time, or in some cases, never receive their refund from the insolvent developer/liquidator.

Another available alternative which is rarely carried out is the statutory termination of sale and purchase agreements provided for under the Housing Development (Control and Licensing) Act 1966. In summary, you would need to fulfil the following requirements:

(i) The developer must agree in writing to terminate the sale and purchase agreements;

(ii) The application must be submitted within 6 months after the execution of the first SPA;

(ii) At least 75% of all the purchasers must agree to terminate the SPA.

Ultimately, the discretion lies with the Minister on whether to approve the application.