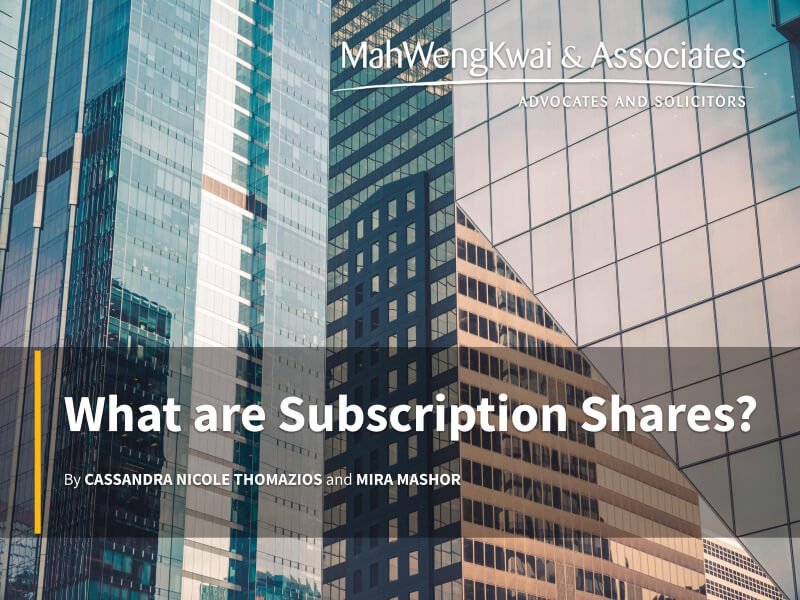 On 14 December 2020, AirAsia X Bhd announced the issuance of shares to new investors under a special purpose vehicle (SPV) to raise capital in the company where the incorporated SPV sought a minimum subscription of RM50 million. This is a common way for a public listed company to attract more investors and attain more funding by issuing shares to the public. This article will give a detailed explanation on the concept and features of subscription shares and will focus on private limited companies.

Subscription shares are shares that investors subscribe to for a purchase price in exchange for equity in the company. These shares can take the form of ordinary or preference shares with an option of being bought back by the company at a later date for a fixed conversion price and within a fixed period of time. This issuance of shares can only be done by the company itself and such shares are bought by a potential investor that is commonly known as a subscriber. In the case of subscription shares, the funds invested by the investor will be deposited directly into the company’s account for the issuance of the new shares. This is different from share purchase agreements, whereby the purchasers and vendors sell and transfer the sale shares and the purchase price is paid to the vendor.

A subscription of shares may be used at any stage of a business for a private limited company. The nature of the subscription agreement will differ depending on the type of share being issued such as ordinary, preference or convertible redeemable preference shares. It is important to differentiate between a sale and purchase/share sale agreement on the one hand and a share subscription agreement on the other. The former relates to sale and transfer of shares in a company from an existing shareholder and from existing share capital in the company. The latter relates to subscriptions where there is an issuance of new shares or classes of shares in a company meaning the share capital of the company is increased to cater for the new shares.

In an existing company, when a new issuance of ordinary shares is issued, a decrease in an existing shareholder’s ownership may occur. Subject to the company’s articles of association/constitution, a portion of the new issuance of shares may be purchased by existing shareholders so as not to dilute their current shareholding in the company. It is also commonly referred to as anti-dilution rights or the first right of refusal.

Similarly, when subscribing for ordinary shares, to protect the rights of the investors/subscribers in the company in future issuance of shares, the SSA may encompass clauses that provide the investor the right to maintain their percentage of ownership in the company. Such anti-dilution rights consist of offering current shareholders in the company an option to buy a proportionate number of shares in any future issue of shares subject to the company’s constitution/articles of association. The importance of this clause is to protect the investors/shareholders from the risk of seeing new shares issued at a lower price than what was previously paid by the investors. For example, this clause protects an investor, who originally bought shares for RM20 per share, from a future situation where the company issues new shares at RM15 per share. In such an instance, the SSA should cater for either a “weighted average” provision or a “ratched-based” provision. In the case of the former, the share price offered will be the difference between the original price and the new price. In the case of the latter, the shares will be sold at a lower price.

It is common for companies seeking investors to firstly issue a term sheet setting out the type of shares being offered and investment structure. The term sheet also makes reference to an outline of provisions typically captured under the SSA.

In a share subscription agreement, there are standard clauses that are to be expected in the agreement. It may include the following:

The subscription of shares allows for the investor/subscriber and the company to benefit from the transaction. In turn, this will allow the company to generate more capital whilst the investor/subscriber will be entitled to a percentage of ownership in the company or preferential rights to dividends as a preferential shareholder. However, it is essential that the terms in the SSA are negotiated and drafted accurately to reflect and record both parties intentions. It is always best practice to ensure that agreements, including SSA’s, are non-ambiguous and accurately reflect the intentions of both parties. Disputes typically arise in share subscription agreements where key elements relating to conditions, rights of each party and nature of share transfers are not set out effectively.