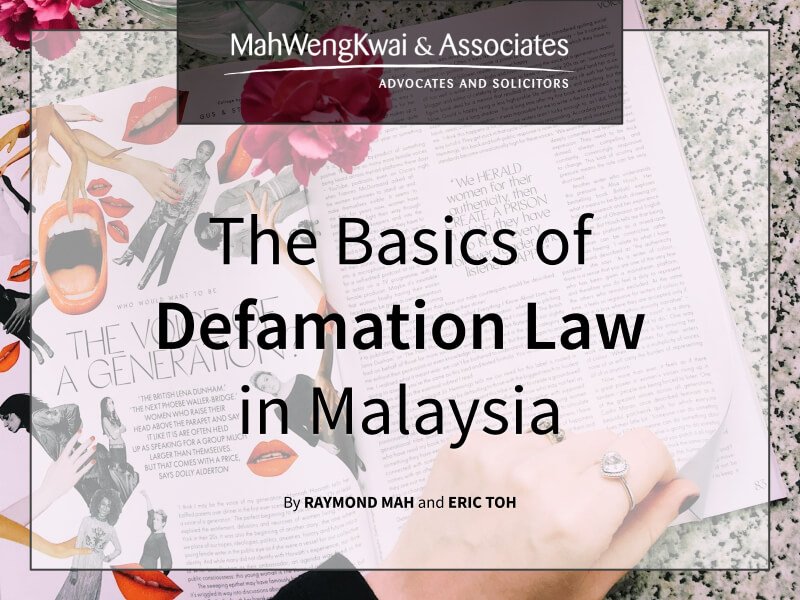 The law presumes that a person is of good character, unless proven otherwise. If a statement about a person is defamatory and affects the reputation of that person in the eyes of the public, that person may have a claim for defamation against the maker of that defamatory statement.

The Defamation Act does not define the word “defamation”. Instead, the definition of “defamation” is to be found in Malaysian case law and the English common law. By virtue of section 3 of the Civil Law Act 1956, the common law of England as at 7 April 1956 in relation to defamation is applicable in Malaysia.

At common law, there are two types of defamation:

Statement Must Be Defamatory

For both libel and slander, a defamatory statement is required.

There are two methods of interpreting the words in an allegedly defamatory statement:

The natural and ordinary meaning of words may be:[1]

Innuendo is used to describe words which have special meaning only to persons who have knowledge of some special background or facts.

For example, the statement that “Kenny recently purchased a luxurious bungalow worth RM10 million” may not be defamatory under its natural and ordinary meaning. Without knowing more about Kenny, it can be taken to mean that Kenny is a wealthy man who recently made another property investment.

However, for those who know that Kenny is employed as a civil servant, the statement can be understood to mean that Kenny may be engaging in corrupt activities. This is because it is usually difficult for a civil servant to be able to afford such a lavish home.

In an action for libel, the following elements need to be satisfied:

For an action in slander, the following elements need to be satisfied:

In an event attended by many of your colleagues, someone loudly exclaims that you are a lazy and incompetent worker. This person also said that you are only in your current position due to certain “favours” provided to your superiors.

Additionally, for slander to be actionable, generally a person is required to prove that he/she suffered actual damage or special damage. A person will have to show that he/she suffered pecuniary loss or loss that is capable of being estimated in money directly due to the slanderous remarks made against him/her.

Nevertheless, the Defamation Act provides that certain slanders are actionable without proof of special damage suffered:

Sufficient Reference to the Plaintiff

To succeed in an action for defamation, the Plaintiff has to prove that the alleged defamatory statement refers to the Plaintiff.

There are two questions that have to be answered on the issue of reference to the Plaintiff:[2]

P and D are neighbours. P sued D for putting a notice up at the front wall of D’s house which stated, among others, that D’s neighbours have been stealing his mail. As D’s house was located at a corner of the housing area and P was D’s only immediate neighbour, the Court held that the notice with the words: “jiran mencuri surat-surat kami” sufficiently referred to P.

Once the elements for libel or slander are satisfied, the following are common defences that may be raised:

To rely on this defence, a person has to show that the defamatory words are true or substantially true.

B publishes a defamatory statement about C having an extramarital affair. B will be successful in raising the defence of justification if B can prove that C did indeed engage in adultery.

B publishes a statement about C having an extramarital affair, honestly believing it to be true. B will not be successful in raising the defence of justification unless B can prove that C did indeed engage in adultery.

Defamatory words published by repeating a rumour cannot be justified by proving that there was such a rumour.

B publishes a statement about C having an extramarital affair after hearing a rumour about it. B will not be successful in raising the defence of justification if B can only prove that there was such a rumour.

The common situations that the defence of absolute privilege may be raised are for defamatory words published in:

The defence of absolute privilege can still succeed even if the statement was made with malice by the defamer.

The defence of qualified privilege is available where the defamatory words were:

However, this defence will fail if the defamatory words were published with malice.

B (subordinate) authors a letter of complaint regarding the poor or unlawful conduct of C (supervisor) and delivers the letter to C’s superiors in the company and the president of the union of employees in the company. The letter contains statements that potentially defame C.

B’s letter of complaint to C’s superiors is likely to be protected by the defence of qualified privilege if the letter was published without malice as:

B wrote and published a letter to the Advocates & Solicitors Disciplinary Board containing allegations that C (advocate & solicitor) intentionally deceived the Court and is unfit to practice as an advocate and solicitor.

B’s letter to the Advocates and Solicitors Disciplinary Board (“DB”) is likely to be protected by the defence of qualified privilege if the letter was published without malice as:

There are two (2) elements which have to be satisfied for a defendant to succeed in raising the defence of Reynold’s Privilege:[4]

Some factors which can be taken into account in determining whether the defendant exercised ‘responsible journalism’ are:[5]

For the defence of fair comment to succeed, the following elements will have to be satisfied by the defendant:[6]

A fair comment may be defined as a comment which a fair-minded man holding strong views, obstinate views or prejudiced views could have honestly made based on the facts proved.[7]

However, this defence will fail if the defamatory words were published with malice.

B, a court reporter, published a newspaper article reporting proceedings of a trial. The article contained a few statements which C, an advocate and solicitor, claimed was defamatory of him.

The Court held that the words published in their natural and ordinary meaning imputed to C the following:

However, B succeeded on the defence of fair comment on the basis that B’s statements were fair comment based on B’s honest and fair observations of what happened in the case.

Both defences of qualified privilege and fair comment will fail if it is proven that the defamatory words were published with malice.

Examples of situations where malice may be found to exist are:

B, an educational institution, sued C, a newspaper for publishing an article which contained statements which were defamatory of B. The statements implied that B was a ‘diploma mill’. Among the defences relied on by C was the defence of fair comment. The Court held that the defence of fair comment was defeated by malice on the part of C as C “deliberately or at least recklessly abstained from availing themselves of means of information which lay at hand when the slightest inquiry would have shown that the imputation appearing in the article complained of were groundless”.

D published a defamatory statement that he received information from a businesswoman that P (a local councillor) had sought and obtained bribes from her. The information was obtained in 2012 but was not acted upon until 2013 (just before the 13th General Election) where D made the defamatory statement in two press conferences. The Court held that D could not rely on the defence of qualified privilege as D did not have a duty to issue press statements regarding the information he received from the businesswoman and the press did not have a corresponding duty to receive the information. Instead, D should have reported the alleged wrongdoing to the MACC or the police.

Further, the Court also held that D’s actions were actuated by malice as D failed to inquire from P to verify the truth of the information that D received from the businesswoman when he could have done so but instead chose to publicise the information to the press to score political capital for himself and his political party ahead of the impending general elections.

In West Malaysia, the limitation period to bring an action in defamation is six (6) years.

The Defamation Act 1957 was drafted and passed at the time when print and post were the technology of the day. However, the Defamation Act has remained unchanged since its enactment despite technological advances in communication, maturing standard in journalism and evolving societal values. The common law evolves to keep up to date, for example, with the adoption of new principles such as the Reynold’s privilege and the acceptance that written statements includes digital publications.

It is arguable, however, that progressive judgment and incremental changes come too slowly. Perhaps a comprehensive review of the Defamation Act is necessary with the advent of the internet and various social media platforms, which can allow the spread of defamatory statements far faster and wider than ever envisioned by the drafters of the Defamation Act.

By Raymond Mah and Eric Toh