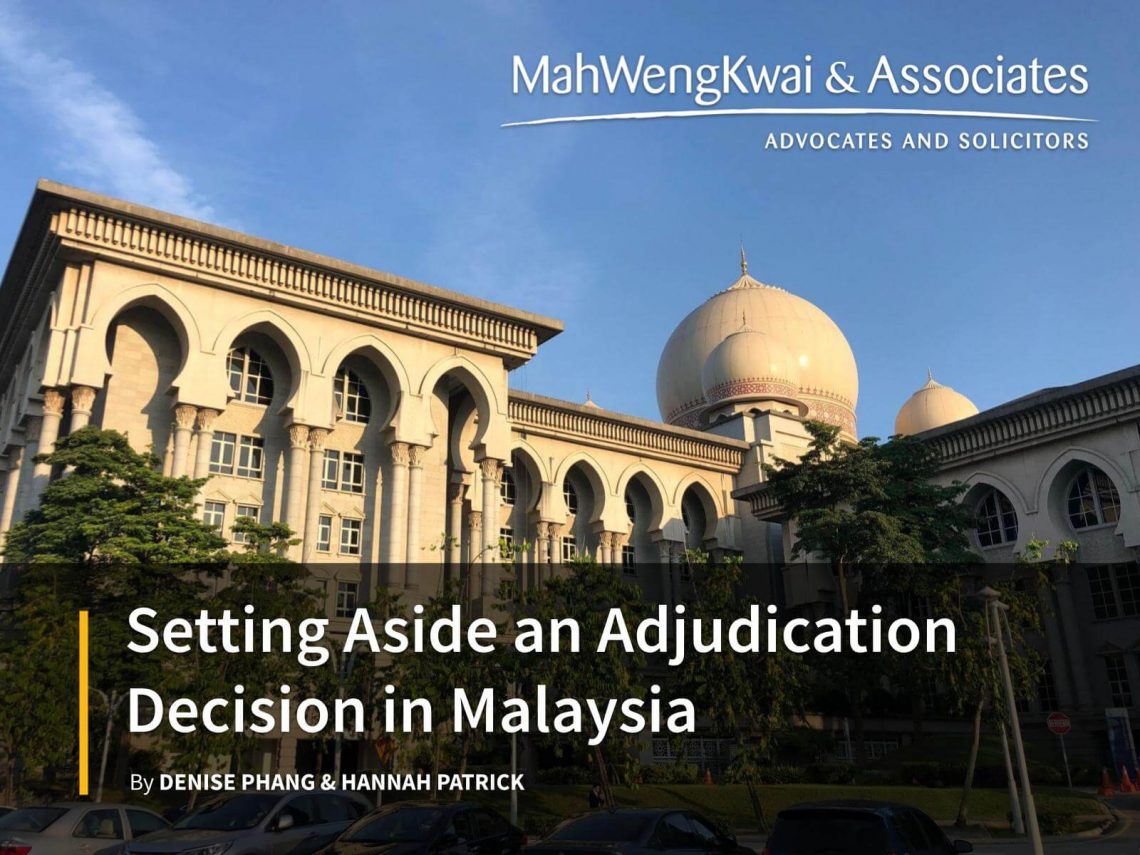 Adjudication continues to be a popular choice of dispute resolution in the construction industry in Malaysia since the Construction Industry Payment and Adjudication Act 2012 (CIPAA 2012) came into force on 15.4.2020. The expedited adjudication process has been described as “rough justice” and can leave the unsuccessful party very unhappy with the decision.

Grounds for Setting Aside an Adjudication Decision

Pursuant to section 15 of CIPAA 2012, an adjudication decision can only be set aside on one of the following four grounds:

(A) Improperly procured through Fraud or Bribery

In the case of Gumi Asli Electrikal Sdn Bhd v Dazzling Electrical (M) Sdn Bhd & Another Case [2020] 1 LNS 189, the High Court held that two elements have to be proven to invoke section 15(a) of CIPAA 2012: (i) fraud has been committed; and (ii) that the adjudication decision has been “improperly procured” through the fraud. Even if fraud is proven, if the fraud does not affect the adjudication decision, the decision may not be set aside. Parties will have to adduce sufficient evidence to prove fraud and that the fraud led to the adjudication decision. To date, there have not been any reported decisions that have succeeded on the ground of fraud.

(B) Breach of Natural Justice

(C) Did not act independently or impartially

As the principle goes, “… justice should not only be done, but should manifestly and undoubtedly be seen to be done.” (R v Sussex Justices, ex p McCarthy [1924] 1 KB 256 at p 259). In the conduct of adjudication proceedings, an adjudicator is under a duty to act impartially and in an unbiased manner, be it in fact or in perception. For example, parties should be afforded the same time for submitting documents, equal opportunity to adduce expert evidence, equal opportunity to address the tribunal during a hearing etc.

(D) In excess of jurisdiction

Excess of jurisdiction is a common ground raised in setting aside applications. An adjudicator is said to have acted in excess of his jurisdiction when he proceeds to determine an issue that was not within the scope of the adjudication proceedings or has failed to act in accordance with the statutory provisions of CIPAA 2012.

Examples of adjudicators acting in excess of jurisdiction include:

The court can only set aside an adjudication decision based on the four grounds as stated above. A setting aside application is not an appeal. Hence, the court cannot set aside an adjudication even if it is of the opinion that the adjudicator made an error on a finding of fact or on interpretation of the law. The Court of Appeal in the case of ACFM Engineering & Construction Sdn Bhd v Esstar Vision Sdn Bhd and another appeal [2016] MLJU 1776 succinctly held:

“In the context of section 15 of CIPAA 2012, it cannot be the function of the Court to look into or review the merits of the case or to decide the facts of the case. The facts are for the adjudicator to assess and decide on. The Court’s function is simply to look at the manner in which the adjudicator conducted the hearing and whether he had committed an error of law during that process. Such error of law relates to whether he had accorded procedural fairness to the Appellant.”

Given the “temporary finality” nature of adjudication decisions, an unsuccessful party may either relitigate the matter by initiating arbitration or court proceedings or to apply to set aside when it receives an unsatisfactory adjudication decision. However, depending on the facts of the case, a setting aside application may not be the most appropriate action to pursue.

In deciding whether a setting aside application ought to be pursued, each case should be examined in its unique circumstances to determine the most appropriate and cost-effective remedy. Parties are encouraged to seek professional legal advice on their cases’ particular facts and circumstances.

For more information, you may watch a replay of the MWKA Online Talk “Setting Aside an Adjudication Decision – Can it be done?” A copy of the talk slides in PDF format is available for download here.