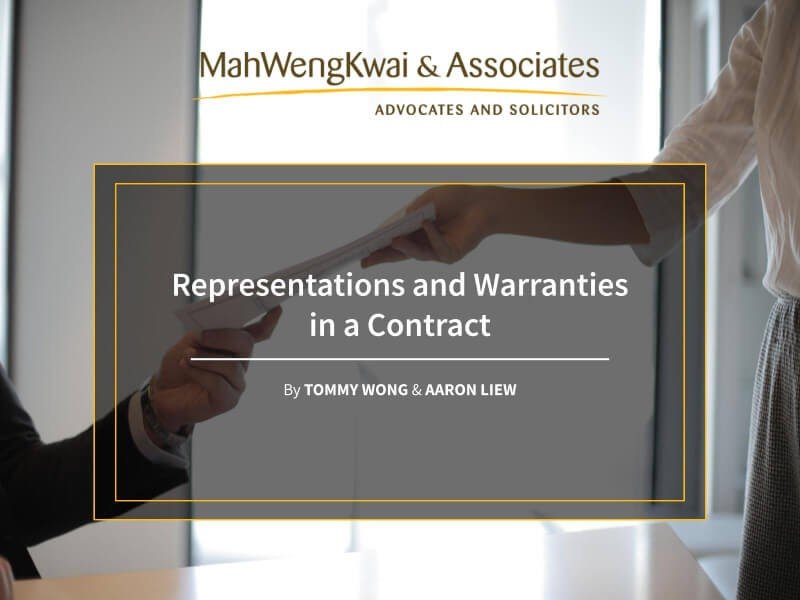 The rights and obligations of parties to a contract are governed by its terms and conditions. Clauses relating to representations and warranties provided by one party to the other are common and very important. Parties should understand the meaning and context of such clauses before executing the contract. This article provides an insight into the context behind the “Representations and Warranties” clause.

Representations and warranties are two separate and distinct legal concepts. However, these two legal concepts are often combined under a single clause heading in most, if not all, commercial contracts. It is important to note that representations and warranties differ from each other as they have their respective remedies in the event of a breach.

In the event the representation is untrue, and the other party has entered into a contract upon reliance on such representation, the aggrieved party is entitled to rescind the contract and claim damages. Section 19 of the Contracts Act 1950 provides for the voidability and rescission of contracts:

“19. Voidability of agreements without free consent

(1) When consent to an agreement is caused by coercion, fraud, or misrepresentation, the agreement is a contract voidable at the option of the party whose consent was so caused.

(2) A party to a contract, whose consent was caused by fraud or misrepresentation, may, if he thinks fit, insist that the contract shall be performed, and that he shall be put in the position in which he would have been if the representations made had been true.”

However, there is a certain exception to the voidability of contracts under Section 19 of the Contracts Act 1950. If the misrepresentation did not cause the aggrieved party to enter into the contract, the relevant contract will not be rendered voidable.

“The Vendor hereby warrants that:-

(a) ABC Sdn Bhd is a company duly incorporated and existing under the laws of Malaysia;

(b) This Agreement, when executed by the Vendor, will constitute legal, valid and binding obligations of the Vendor enforceable in accordance with its terms; and

(c) The execution, delivery and performance of this Agreement by the Vendor will not result in a breach of any agreement, instrument or document to which it is a party or by which any of its assets are bound, or any order, judgment or decree of any court, governmental agency or regulatory body having jurisdiction over the Vendor.”

“74. Compensation for loss or damage caused by breach of contract

(2) Such compensation is not to be given for any remote and indirect loss or damage sustained by reason of the breach.”

Significance of the Representations and Warranties Clause

More often than not, representations and warranties are combined and used interchangeably. However, it is important to recognize the difference between the two legal terms for the purposes of assessing the remedies available and the amount of damages that can be claimed in the event the contract is breached. It is of great importance that the wording of the “Representations and Warranties” clause in a contract expressly sets out whether the statement made is either a warranty or a representation, or both.

By Tommy Wong and Aaron Liew