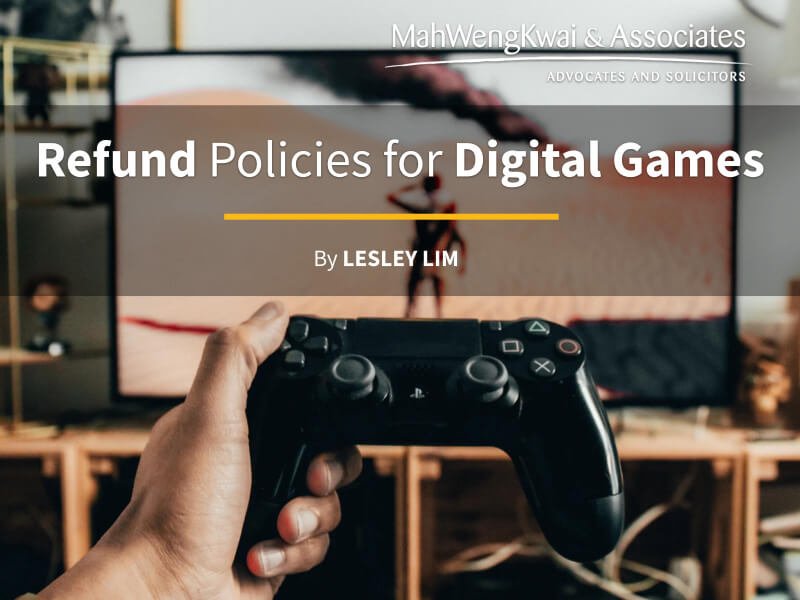 Since its announcement back in 2012, one of the most highly anticipated games finally hit the shelves on 10 December 2020. Priced at US$60, Cyberpunk 2077 recorded 8 million in pre-orders, which arrives at an estimated US$500 million in revenue. Whilst 59% of the purchases were for PC, 41% opted to enjoy the game on their consoles. Digital downloads made up 74% of the sales whereas only 26% purchased a physical copy of the game.

Alas, Cyberpunk’s Developer, CD Projekt Red (“CDPR”) hit the headlines when players found out that the game was not running as well as expected on the PlayStation 4 (“PS4”) and Xbox One. Many experienced low-quality graphics and performance issues such as bugs, glitches, lags, even odd-behaving NPCs (non-player characters) and weapons were hanging mid-air. 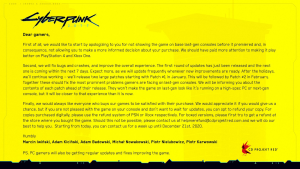 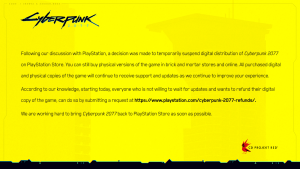 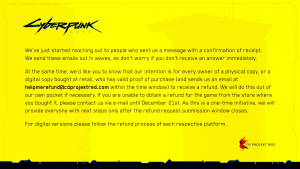 With the promise of a refund, the policies surrounding digital returns come into question.

It is essential to first understand the various contractual relationships that exist in this transaction. 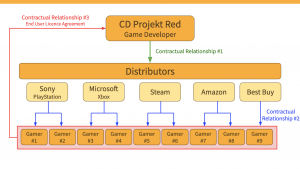 Contractual Relationship #1 : Between CDPR and the various distributors

Contractual Relationship #2 : Between a distributor and the respective gamers (customers)

Contractual Relationship #3 : Between each gamer and CDPR

When an unhappy gamer (customer) wants to return the game, they find that different distributors have different refund policies.

This is because each refund policy is determined by the respective agreements under Contractual Relationship #2.

In general, we note that there are two main boundaries in determining digital returns – time and usage.

Below are some examples of these boundaries being used individually or cumulatively by various distributors:

Even though CDPR mentioned in its official statement that if gamers are not pleased with the game on their consoles and don’t want to wait for updates, gamers can opt to refund the copies purchased digitally using the refund system of PlayStation Network (PSN) or Xbox respectively.

Sony initially refused to refund gamers once the game had been downloaded or streamed but subsequently, agreed to give a full refund – here we see Sony adopting the “usage” boundary.

On a side note, Sony has since delisted Cyberpunk 2077 from the PlayStation Store, a rare occurrence for a game of this magnitude.

On the other hand, Microsoft adopted the “time” boundary – gamers who are experiencing performance issues with the older generation Xbox One can submit a request refund to Xbox’s support website : within 14 days of purchase. However, submitting a request does not guarantee a refund.

According to Steam’s official policy, a refund may be issued if the request was made within 14 days of purchase and has been played for less than 2 hours. Even if a request falls outside of these time and usage boundaries, Steam will still look at your request. However, the approval for a refund is at Steam’s sole discretion.

Amazon offers a full refund for video games within 30 days of purchase. If the game has been opened or played, a restocking fee of up to 100% may be incurred.

Contractual Relationship #3 is often overlooked but there are several pertinent provisions that gamers ought to be aware of in the End User License Agreement between each gamer and CDPR.

Note: CDPR has even prepared short summaries for each clause of the End User License Agreement  to ensure that a real cyberpunk will understand its contents.

1.  ABOUT THIS AGREEMENT
1.1  This Agreement. This End User Licence Agreement (or “Agreement” for short) is a legally binding contract between you and CD PROJEKT S.A., seated at ul. Jagiellonska 74; 03-301, Warsaw, Poland.
1.2  Acceptance. This Agreement will be binding on you and us once you download, install or use Cyberpunk 2077 (whichever is sooner). If you do not agree to it, you are not permitted to download, install or use Cyberpunk 2077.

One of the disclaimers that CDPR has made is that it does not promise that Cyberpunk 2077 will be error-free but pledges to correct any defects.

12.  LIABILITY
12.1  Our Disclaimers. Your use of Cyberpunk 2077 is at your own risk. … We do not warrant that Cyberpunk 2077 will be uninterrupted or error-free, that defects will be corrected, or that the game will be free of viruses or other harmful components.

Suppose an unhappy gamer wishes to consider initiating legal proceedings against CDPR. In that case, their legal avenue lies in the Courts of Poland and the laws of Poland shall govern the dispute.

15.  GOVERNING LAW
15.1  If you are a resident in the European Union and elsewhere in the world (but not the United States of America):
You and we agree that your use of Cyberpunk 2077, and this Agreement, and any issues arising out of them, will be governed by and interpreted according to the laws of Poland and any dispute regarding it will be exclusively under the jurisdiction of the courts of Poland.

Nevertheless, CDPR encourages gamers who have concerns or issues to reach out to its support services. The Agreement further provides that parties agree to make reasonable and good faith efforts to resolve the dispute informally within 30 days before resorting to further legal action.

16.  DISPUTE RESOLUTION
16.1  Disputes. If you have concerns or issues with us, we hope we can resolve them quickly and amicably through Cyberpunk 2077 support service accessible at https://support.cdprojektred.com/en/ . However, we recognise that occasionally there might be legal disputes which are not so easily resolved. In this section we explain what happens if there is a legal dispute.
16.2  Informal Dispute Resolution.
We and you both agree to make reasonable and good faith efforts to resolve any dispute between us informally. Normally we would suggest that this dispute resolution period lasts thirty (30) days unless exceptional circumstances exist. If it is not resolved during this time, the next steps depend on where you live.

Should I request a refund?

Ultimately, this question can only be answered by you (the gamer). If you are truly unhappy with the game’s current state, the option to refund remains available (subject to the relevant distributor’s refund policy).

If you feel the game is worth the wait, CDPR has expressed its commitment to fixing the situation and plans to release two large patches in January and February 2021, albeit there is no guarantee that the fix will be to the satisfaction of gamers. 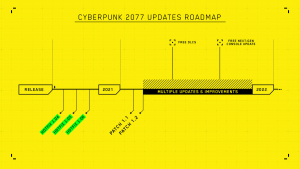 Nevertheless, with its mind-blowing graphics along and stunning open-world adventure gameplay to explore, this RPG is already set to be a record of its own.

In a period where PUBG and Mobile Legends appear to be dominating the arena, Cyberpunk 2077 may prove that single-player games are still alive, more than ever.

P.S. Our Partner, Lesley Lim, was invited by BFM Radio to share some views about this topic. Her podcast can be heard at this link (from 10:50 onwards) – https://www.bfm.my/podcast/night-shift/ggwp/ep03-refund-policies-for-digital-games.