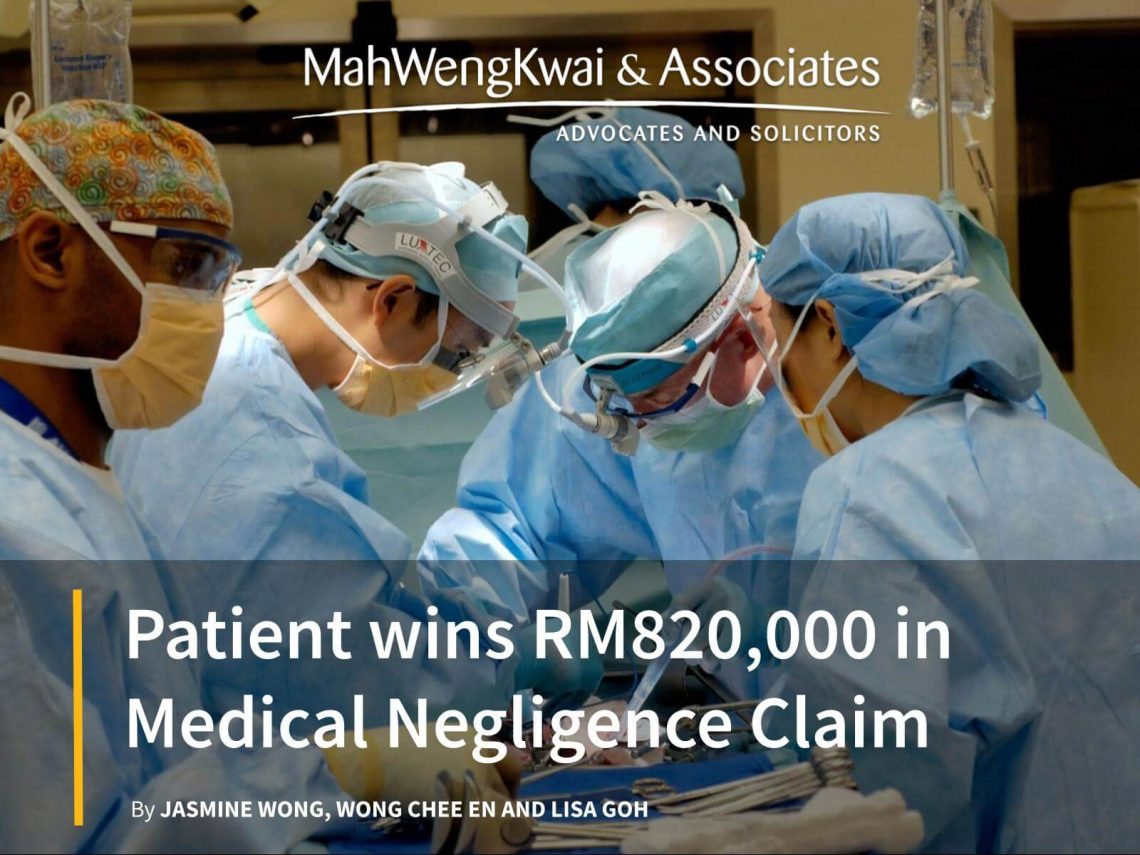 Issue:  Mdm Y*, 55, a small-time business owner, was first admitted into a private hospital in Kuala Lumpur for a surgery known as a bilateral oophorectomy (First Surgery) to remove two ovarian cysts in July 2013. The surgery was performed by a Consultant Obstetrician & Gynaecologist, and a Consultant General & Colorectal Surgeon. Mdm Y was discharged, but was rushed to the Emergency Department a few days later due to severe pain in her abdomen. A CT scan revealed that Mdm Y had a perforation of the sigmoid colon in the abdominal wall. This and further complications from various perforations and infections resulted in Mdm Y needing three more open surgeries in the course of 37 days.

Mdm Y had to live with two stoma bags for over a year, the procedures of which were later reversed. The whole experience caused her much trauma, anxiety and frustration, as it greatly affected her quality of life. Prior to the incident, Mdm Y was a very active and independent person – running her business, caring for her 16-year-old daughter, enjoying her gardening. However, after her four surgeries, Mdm Y spent most of her time in bed, in pain, and needed a caregiver. Her two businesses – a mini-market and a milk powder distribution – also suffered greatly, and she was forced to sell off her mini-market to settle her medical bill of about RM200,000.

“This incident has turned my life upside down. My abdomen is full of cuts, holes and surgery scars. Until now, I am either having diarrhoea or constipating every day. I can only take a very plain diet. I cannot eat the normal foods that people take,” Mdm Y said.

In July 2019, Mdm Y commenced a civil suit against the Gynaecologist and the Colorectal Surgeon to claim for damages for the pain and suffering that she had suffered due to the four laparotomies performed on her. The matter was called to trial at the Kuala Lumpur Sessions Court.

Approach/Strategy:  Mdm Y was represented by MahWengKwai & Associates (MWKA). We engaged an expert witness, a general surgeon and professor of surgery at a medical university to explain what went wrong during surgery. The expert testified that the patient had suffered from a vascular injury (an injury to the blood vessel) during the First Surgery. This injury resulted in a lack of blood supply to Mdm Y’s colon, which eventually caused the colon tissue to become necrotic (dead tissue) and subsequently led to the perforations in her colon.

The expert witnesses for the Gynaecologist and the Colorectal Surgeon gave evidence that it was not possible to pinpoint the cause of Mdm Y’s injuries, but did not discount the possibility of a vascular injury as testified by our expert witness.

Result: In August 2021, the Sessions Court allowed Mdm Y’s claim and ordered the Defendants to pay her damages in the sum of RM823,172.

Both Defendants have appealed the Judgement and the matter is now pending the hearing of the appeals in the Kuala Lumpur High Court.

The award for damages, particularly the damages for future treatment and surgeries, is welcomed for our client who has suffered and continues to suffer as a result of the negligence. The importance of having a credible and competent expert witness to explain what went wrong cannot be overstated. Allegations must be properly supported by evidence and expert opinions. Once this burden is achieved, it is for the defence to show that the injury suffered was not their fault. In the case, the court accepted on a balance of probabilities that the surgeons caused a vascular injury to the patient’s colon during surgery and that this could have been avoided had greater care been taken during the operation.

Cases like this matter to ensure that patients have legal recourse when the standard of care has not been afforded to them. It holds medical professionals to account – to accept liability for their actions, to raise their standards and improve their safety processes, and to prevent this from happening to others.

Our Medical and Personal Injury team deals with medical malpractice and negligence, and personal injury. For more information, please contact our team or Request a Free Consultation.

Note: This case study does not constitute legal advice. As the facts and circumstances of every case will differ, it is best that you obtain legal advice suited for the issues that you may be facing. Feel free to contact us for a complimentary legal consultation.