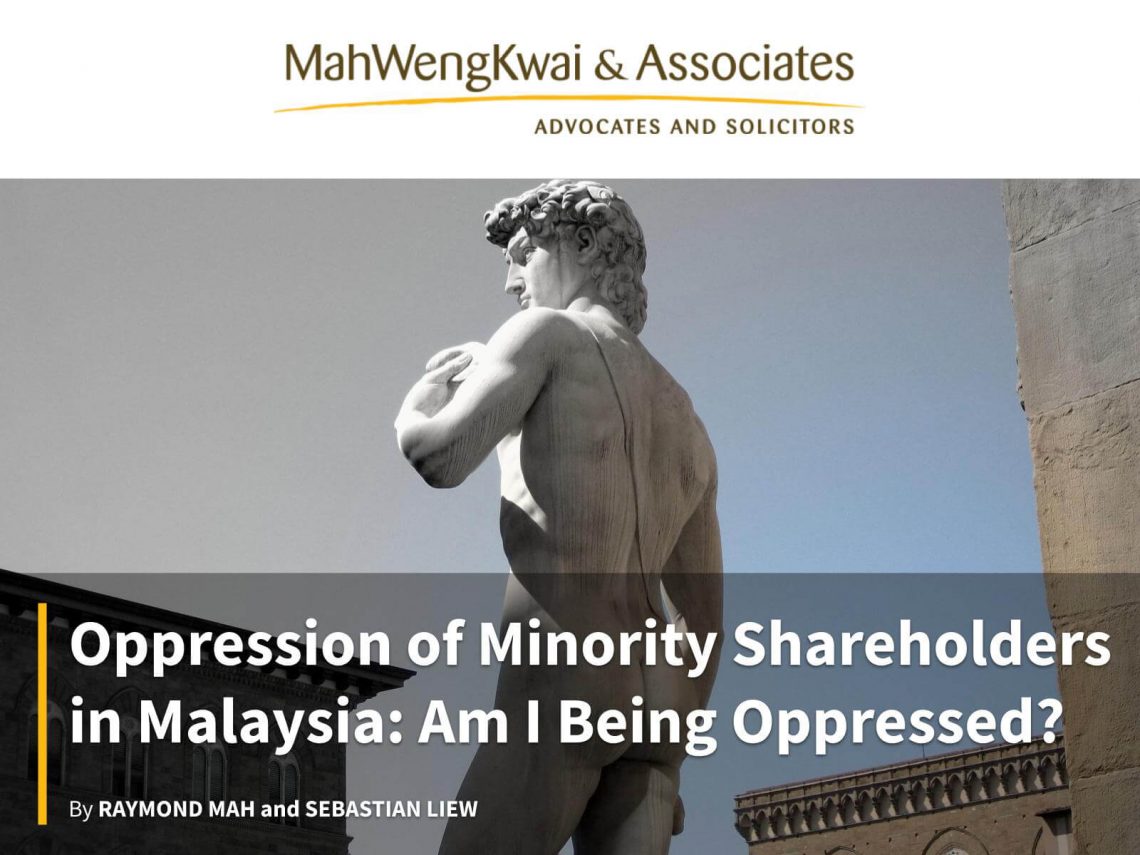 A company is controlled by the majority shareholders under the majority rule principle. This is a fundamental aspect of corporate democracy and corporate governance.

Matters of leadership, direction and management are ordinarily left to the shareholders to determine. Accordingly, the Malaysian courts generally take a non-interventionist approach to management issues and disputes between shareholders. However, an exception to this general rule is when the minority shareholders of a company are being oppressed. In such circumstances, the courts are given and do exercise wide discretionary powers to make orders ranging from a buyout to a winding-up order.

B.  Who are minority shareholders?

A shareholder can be either an individual or a non-human legal entity, like a company. A shareholder who holds less than half the shares (shareholding below 50 percent) of a company’s issued and paid up capital can be classified as a minority shareholder. By virtue of holding a minority interest in a company, a minority shareholder does not have sufficient voting power to exert control over a company or to have significant influence over the direction of the company. Internally, the general dynamics of a company and its affairs are dictated by the majority principle, with the majority’s view prevailing over that of the minority.

To illustrate, if the majority members pass a resolution, it has the effect of binding the minority members even if it is against their interest or wishes (See Section D below on the exceptions to this proposition).

C.  What rights does a minority shareholder have?

Whilst a minority shareholder neither has sufficient voting shares nor a controlling interest in a company, the Companies Act 2016 nonetheless affords the minority certain basic rights. These shareholder’s rights are as follows:

(a)  A member or class of members holding more than 25 percent shares in a company can block special resolutions. This includes blocking (i) the adoption of, or any amendments to, the company’s constitution; (ii) the alteration or reduction of the share capital of the company; (iii) the variation of class rights of members in a class; (iv) a voluntary winding-up petition; and (v) the removal of a liquidator.


(b)  A member or a class of members holding more than 10 percent in a class may apply to court to have a variation of class rights disallowed.


(c)  A member holding or representing at least 10 percent of the issued share capital may convene or requisition a general meeting of the company.


(d)  A member with not less than 10 percent of the total voting rights is able to demand a poll vote at a general meeting of the company.


(e)  A member holding at least 5 percent of the total paid up capital of a public company, having share capital, has the right to request and inspect the service contract of any of its directors.


(f)  Members representing 5 percent of the total voting rights can prevent the re-appointment of an auditor of the company.


(g)  A member representing not less than 5 percent of the total voting rights can require the circulation of a written resolution.

D.  When can a minority shareholder bring a Court claim for oppression?

The supremacy of the majority is a fundamental principle of company law and the general rule is that the minority will have to subscribe to the rule of the majority. Being consistently outvoted at meetings is not an oppressive conduct. Displacing the minority’s influence does not amount to a wrong, unless it is expressed in (i) a Shareholders’ Agreement; or (ii) otherwise provided for in the Articles or Constitution of the company. However, a wrong is committed when the majority rule turns into a rule oppressive of the minority members.

In circumstances where the majority rule has been abused, the Companies Act 2016 affords minority shareholders the necessary tools to combat such unfair treatment. An aggrieved shareholder in such a situation will be litigating under his/her personal capacity as a shareholder of the company.

The legal test for oppression is whether there is commercial unfairness in the treatment of a shareholder. Commercial unfairness is assessed on a case-to-case basis, taking into consideration a variety of factors that include the relationship in issue, the expectations of the parties, any existing agreements or any common understanding between the members of a company.

Clear cut examples of oppressive conduct towards minority shareholders are the denial of the basic rights afforded by the Companies Act 2016. These basic rights of a minority member are as listed and detailed in Section C above.

The decided court cases on this subject has further expanded the scope of what may be deemed oppressive to the minority members of a company. Other acts of oppression developed under case laws include:

(a)  the misappropriation of assets belonging to a company;

(b)  withholding certain types of information from the members;

(c)  the diversion of profits to the majority members at the expense of paying minority dividends;

(f)  exclusion of certain class of members from management;

(g)  the failure to hold AGMs; and

(h)  the dilution of shares.

F.  What remedies can be given for oppression?

The Companies Act 2016 provides specific remedies under section 346 for oppressed shareholders. These remedies are listed under section 346(2) and they include the power of the court (i) to order a share buy-back; (ii) to order injunctive or directive reliefs; and/or (iii) to make a winding-up order.

The reliefs under the Companies Act 2016 are not exhaustive. The court when dealing with an oppression action has wide powers to grant remedies that would bring such matters to an end. These extensive remedies include the powers of the court to grant reliefs that an oppressed shareholder did not pray for. The court’s scope of authority is not only extensive in this area but is also unfettered in this respect.