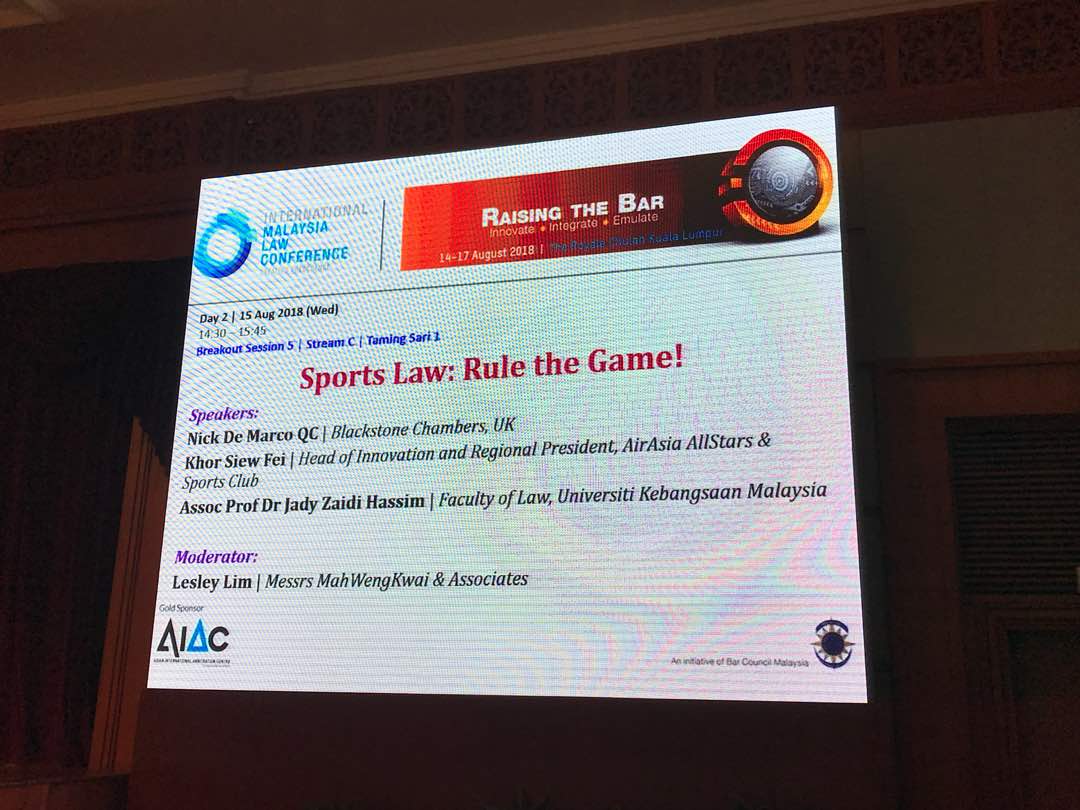 The International Malaysian Law Conference (“IMLC”) has come and gone. After four (4) days of intense and interesting discussions, debates and dialogues, we say goodbye to yet another successful Malaysian-Bar-curated-conference. Below is a summary web report of MahWengKwai & Associates (“MWKA”) at the IMLC 2018.

MWKA is pleased to be given the opportunity to moderate the session on Sports Law entitled, “Sports Law: Rule the Game!” at the IMLC 2018. Our senior associate Ms.Lesley was the moderator of the session, which saw Mr. Nick De Marco QC of Blackstone Chambers, presenting his views on football law. Being a barrister involved in numerous football based tribunals and arbitrations, Nick was of course well placed to speak on this area. He provided us with an insight on the growth and development of football law within the scope of sports law. It was interesting to hear his explanation about a few prominent football based cases.

The session also hosted Dr. Jady, an associate professor from the National University of Malaysia (“UKM”). Dr.Jady is acknowledged as the country’s renowned sports law professor, and true to his reputation, he presented a paper with regards to the sports law framework in Malaysia. Dr. Jady shared his views on the Sports Development Act and the operations of the Sports Commissioners Office.

This session nonetheless was intrigued by the final speaker from Air Asia, Mr. Khor Siew Fei, the Head of Innovations and Regional President. He leads the Air Asia esports team. He shared the amazing story of esports in Malaysia, and the involvement of Air Asia not only as a sponsor, but as an owner of an esports team.It was evident from the buzz around the hall that Siew Fei had certainly caught the imagination of the delegates.

Lesley had informed the delegates at the beginning of the session that this was the inaugural sports law session at IMLC. The topics of discussion and the content of the talk had certainly set the tone for future sports law dialogues, not only in the Malaysian Bar but probably around other regions.

On the fourth day of the IMLC, a working group session was dedicated for a discussion on sports law. The title of the session was “Sports Law: Step up the Game! Towards a South East Asian Sports Law Framework”. This was a unique opportunity for speakers and delegates to have a dialogue, as opposed to the traditional conference session where speakers take the podium and present their respective papers.

Richard had initiated a hypothetical discussion revolving around a fictitious athlete from a nation of “Taranta”, and this athlete was born at a country called “Wakanda”. Each speaker was invited to give their perspective and views  with regards to the eligibility issues due to the differing nationality and residency of the athlete, a doping incident involving this athlete and eventually the arbitration, which followed that dispute.

In a highly entertaining discussion, it was evident that the speakers enjoyed the opportunity to speak off the cuff and shared intimate and intricate information from their respective perspectives. The delegates joined in the discussions and at the end of the working discussion, there was a clear interest amongst the delegates to know more about sports law.

MWKA is honoured to have lead that working group discussion.