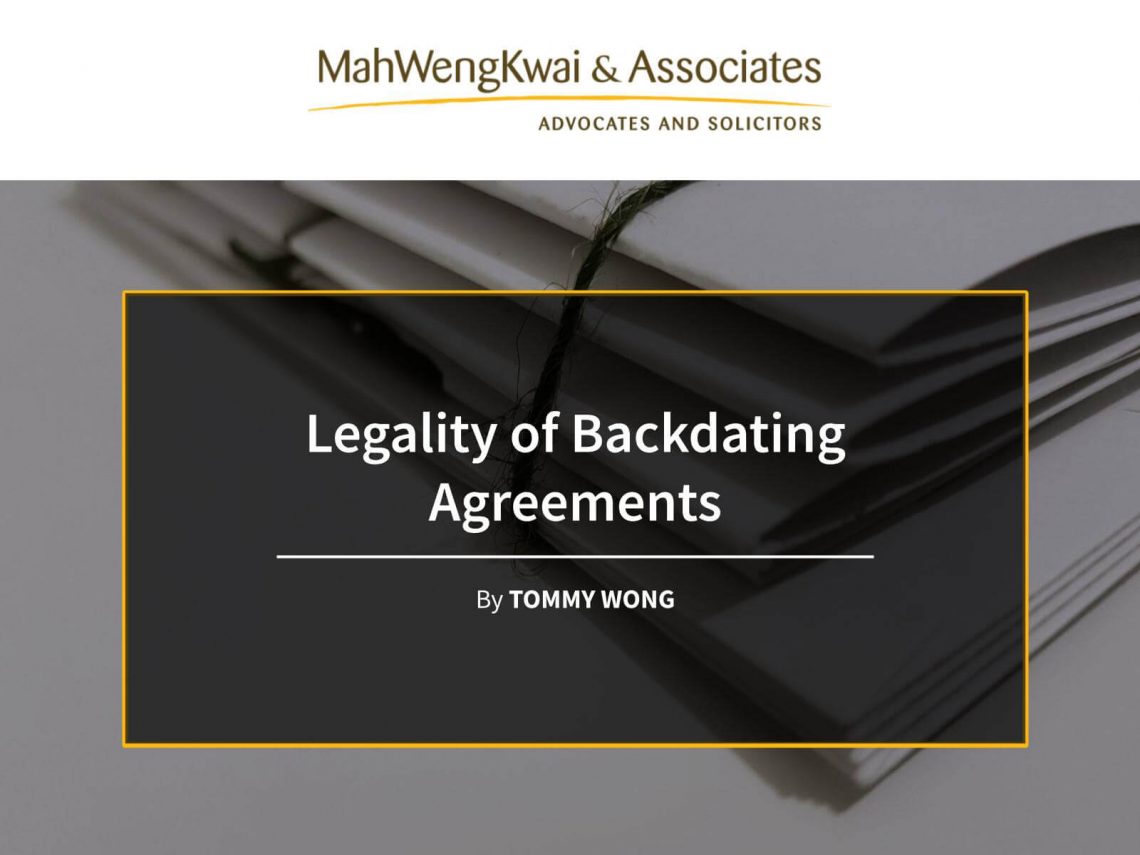 It is a common practice for contracting parties to backdate their agreements and documents. Typically, parties may already start doing business with each other even before the written agreement is finalised and signed. In construction, for example, works often commence before the execution of the construction contract. This may be because negotiations and the preparation of the construction contract take time and require the input of many people. However, it is always important to consider the purpose of backdating an agreement or document and the type and nature of the agreement or document to be backdated. This will determine whether the agreement is either legal and binding or void and unenforceable.

The term “backdating” can be defined as the practice of dating an agreement, contract or any other type of document with a date that is before the present date. An example of backdating an agreement for easy reference is as follows:

Company A had intended to engage a manufacturing company to manufacture its line of sports apparel (“Goods”). On 4.10.2021, Company A  identified Company B as the intended manufacturer, and thereafter both parties began negotiations on the terms of the transaction, such as payment terms, milestones and specifications of the goods to be manufactured. On 18.10.2021, both parties had verbally communicated and agreed on the terms, and further agreed that Company B may commence the manufacturing of the Goods whilst a definitive agreement is being prepared for execution.

The legality of backdating an agreement boils down to the parties’ purpose of backdating the agreement. In the case of Terengganu Forest Products Sdn Bhd v Cosco Container Lines Company Ltd & Anor[1], the High Court held the defendant liable for the tort of deceit in making fraudulent misrepresentation by backdating the bill of lading:

Backdating of a bill of lading in order to bring it within the shipment time in the credit is an act of fraud and amounts to forgery. The learned writer of Schmitthoff’s Export Trade The Law and Practice of International Trade at page 584 states as follows:

Based on the above considerations, the Court concludes that:

(a) The Plaintiff has established beyond reasonable that the Defendants are liable to the Plaintiff for the tort of deceit in making fraudulent misrepresentation in the bill of lading;

(b) The Defendant has failed to discharge the onus of proving fraud on the part of the Plaintiff in instructing the Defendants to make the said representation in the bill of lading and thus the Defendants’ defence of ex turpi causa non oritur action must fail.

(c) The Plaintiff has proven beyond reasonable doubt that the Defendants have caused loss and damage to the Plaintiff in the sum to telling US$1,446,469.58 as a result of the fraudulent misrepresentations made by the Defendants in the bill of lading.

[53]    … parties can make an agreement take effect from an earlier date or a later date than the date of the agreement so long as no third parties or the authorities are being defrauded.

[54]    In the Singapore Court of Appeal case of American Home Assurance Co v Hong Lam Marine Pte Ltd [1993] 3 SLR 682, the Court of Appeal speaking through their then Chief Justice Yong Pung How CJ said at paragraph 67 as follows:

“… In the present case, however, the purpose of the shipbuilding agreement was not to deceive the Registrar. In fact, the purpose of the agreement was perfectly legitimate and proper. The building of the vessel involved no illegality; in other words, the backdating only became illegal when it was used for an illegal purpose – to obtain registration of the vessel in Singapore, which it was not entitled to In the present case, in contrast, the respondents did not need to rely on the backdating in order to succeed in their counterclaim against the shipyard. It was not necessary for them to found their claim against the shipyard as the owners of a Singapore-registered ship, as their cause of action was based on the delay in the delivery of the vessel in breach of a specific term of the shipbuilding agreement. If they had to go behind the backdating to prove the actual date of the shipbuilding agreement in order to succeed in their claim, or if their claim was dependent on the status of the vessel as a Singapore-registered ship, the cases cited by the shipyard (viz Suntoso Jacob, Alexander v Rayson and Palaniappa Chettiar) might be relevant and applicable since the respondents would be basing their claim on a state of affairs which was obtained through a deception on the registrar…”

The High Court had, in the case of FKJV (M) Sdn Bhd (formerly known as Ardenmax Cosmetic Sdn Bhd) v Mode Circle Sdn Bhd and Ors[3], established that a backdated document shall be void where such document is backdated for an improper purpose:

Whenever a document is backdated, one must ask whether it serves merely and simply to memorialise what had been agreed upon earlier though reduced into writing later or that there is a more sinister reason behind the backdating, to if possible defraud third parties and in this case creditors of MCHPL. I am inclined to agree with Mr Ong Chee Kwan for the Defendants that where the backdating fabricates an event that never happened or where the backdating is done for the purpose of reaping an undeserved benefit at the expense of the authorities or other third parties, such backdating is improper and the backdated document is void. …

In the circumstance I found that the Agreement had been backdated with the intention to defraud creditors and this with the consent and complicity of Mr Yong and its purpose being unlawful, the Agreement is null and void and unenforceable. …

In addition to the intent and purpose of backdating an agreement or document, the affected parties should carefully consider the nature and type of agreement or document to be backdated. For example, in the case of Inter Heritage (M) Sdn Bhd v Asa Sports Sdn Bhd[4], Abdul Malik Ishak J (as he then was) took a strict approach as he observed, in the context of a backdated certificate of occupation, as follows:

With respect, I must categorically state that any backdating is and should be construed as contrary to law…,

… In my judgment, a certificate for occupation cannot, in law, have retrospective effect notwithstanding that the difference may only be one day or four days, for that matter…

… And it is ideal to remember that the law does not countenance the backdating of the certificate for occupation – be it partial or temporary. Backdating is taboo, in law. Pure and simple, it is prohibited.

Instruments that are chargeable with duty are required to be stamped within thirty days from the date of the agreement. In the event an agreement (which is an instrument chargeable with duty)  is backdated to a date exceeding thirty days, a penalty may be imposed by the authorities for late stamping. The penalty imposed for late stamping is subject to the period of delay in stamping the agreement, the maximum for which is either RM100 or 20% of the deficient duty, whichever is higher.

Finally, parties should also consider alternatives to backdating agreements, such as including a clause to provide that any preceding fulfilment of obligations fall under the terms of the agreement.