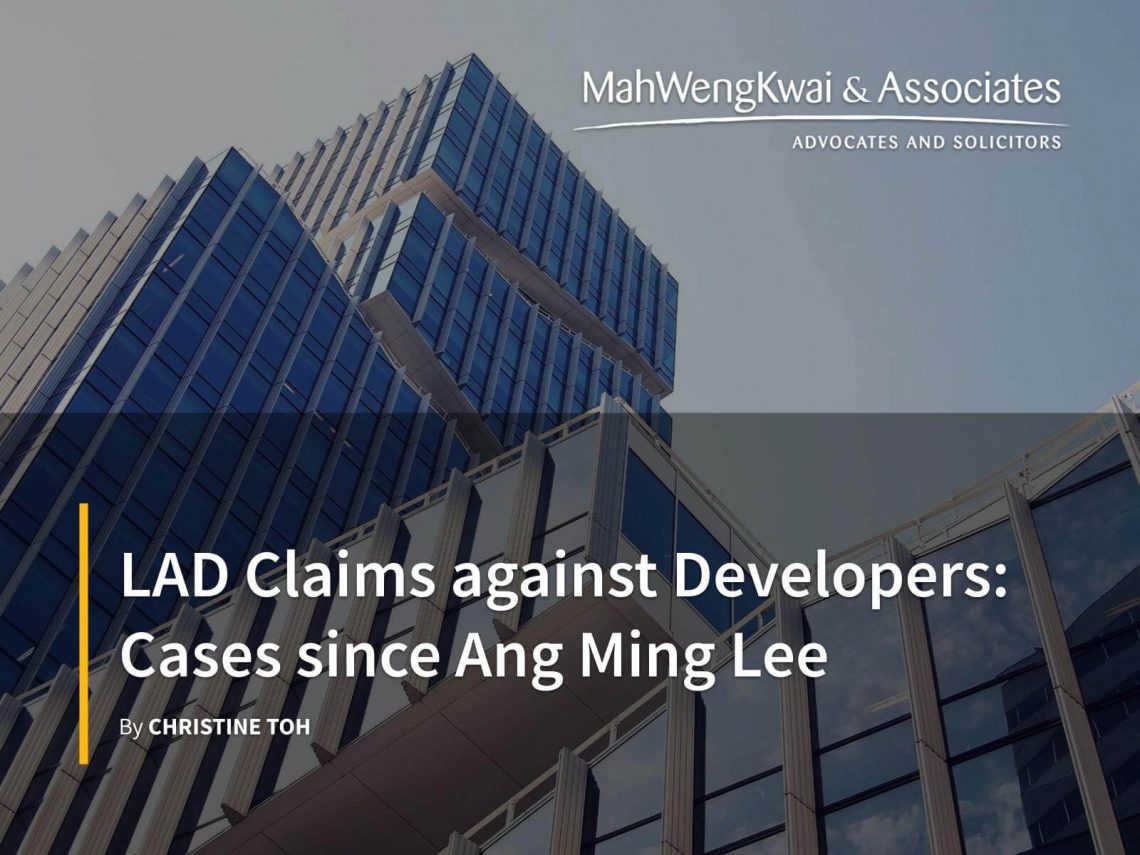 In Ang Ming Lee & Ors v Menteri Kesejahteraan Bandar, Perumahan dan Kerajaan Tempatan & Anor and other appeals [2020] 1 MLJ 281, the Federal Court held that the Controller of Housing does not have the power to extend the completion time of a housing development beyond the prescribed period under the Housing Development (Control and Licensing) Regulations 1989 (“the Regulations”).

Post Ang Ming Lee, there are an increasing number of cases where purchasers of housing developments are suing the developer for the late delivery of properties. The cases relying on Ang Ming Lee involve claims for liquidated damages (“LAD”) which are calculated based on the statutorily prescribed time under the Regulations, ignoring any extension of time given by the Controller of Housing.

In our earlier article, “FAQ on Liquidated Damages for Late Delivery of Properties by Developer” we have addressed frequently asked questions on LAD and the implications of the Federal Court decision in Ang Ming Lee.

This article explores three recent cases that have distinguished the ratio in Ang Ming Lee.

Subsequently, relying on Ang Ming Lee, Obata-Ambak commenced an action against Prema Bonanza. Prema Bonanza contended that it is entitled to claim for LAD based on the 36 months delivery period under Schedule H of the Regulations, despite the terms of the SPAs.

The High Court, among others, agreed with Prema Bonanza that Obata-Ambak’s claim is time-barred. Dissatisfied with the decision, Obata-Ambak appealed to the Court of Appeal.

The Court of Appeal’s decision hinged on the following causes of action:

(a) That the SPAs were invalid at the time of signing, as the SPAs had failed to comply with the prescribed Schedule H; and

(b) That Prema Bonanza had breached Schedule H of the Regulations, by amending the time for delivery of vacant possession from 36 months to 54 months.

The Court held that since Obata-Ambak challenged the validity of the purported amendment from the inception or execution of the SPAs, Obata-Ambak’s cause of action ran from the date of the SPAs, that is on 11.7.2012 and 18.8.2012 respectively.

The Court of Appeal agreed with the High Court that Obata-Ambak’s claim is barred by limitation, as the 6 years limitation period as per section 6(1) of the Limitation Act 1953 had expired on 10.7.2018 and 17.7.2018 respectively. Since the action was filed on 18.6.2020, limitation had already set in and Obata-Ambak could no longer claim against Prema Bonanza.

Bludream City Development Sdn Bhd (“Bludream”) was the developer for 3 blocks of service apartments. The following 2 EOTs were granted:

(a) The Controller of Housing granted the 1st EOT extending the completion time of the development from 36 months to 42 months; and

(b) The Minister of Housing granted the 2nd EOT extending the completion time of the development from 42 months to 59 months.

The purchasers applied to challenge the 2nd EOT granted by the Minister through several judicial review applications (“JR Applications”).

Dissatisfied with the High Court’s decision, Bludream, the Minister and the Controller of Housing all appealed to the Court of Appeal.

The Court of Appeal distinguished Ang Ming Lee and opined that:

The material facts (in Bludream) are poles apart (from Ang Ming Lee) and hence, the proposition of law made in one case cannot be transported and transposed into a different factual matrix especially when the decision-maker is different in that he is a Controller there by a Minister here”

The Court of Appeal held that the Minister has the power to waive or modify Schedule H under the power conferred on him under section 24(2)(e) of the Housing Development (Control and Licensing) Act 1966 (“HDA”) to “regulate and prohibit the conditions and terms of any contract” between a developer and its purchasers. The Court of Appeal also observed that the Federal Court in Ang Ming Lee did not hold that the Minister cannot grant an EOT to the developer on the ground of special circumstances or hardship.

The Court of Appeal allowed the appeal, with the result that the purchasers were not entitled to claim for LAD based on the 36 months completion period as prescribed under Schedule H of the Regulations.

Alpine Return Sdn Bhd (“Alpine”), is the developer of a residential project in Kuala Lumpur known as Residensi Star and the defendants are individual purchasers of Residensi Star. Before the project’s construction, Alpine was advised by its architect and consultant that it would require at least 60 months to construct and complete the project.

The estimated 60 months for completion is attributed to factors such as the complex structural design, foundation work with complex bored piles to be carried out near Jalan Yap Kwan Seng / Jalan Mayang, limited construction time stipulated by Kuala Lumpur City Hall (DBKL) from 8.30am to 6.00pm from Monday to Saturday only, and the traffic congestion at the site of the project, affecting the movement of heavy vehicles and the delivery of construction materials into the site.

Acting under its consultants’ advice, Alpine applied to the Ministry for an EOT to complete the project from 36 to 60 months. On 29.9.2014, the Controller of Housing allowed the application according to Regulation 11(3) of the Regulations.

After the EOT was granted, the Purchasers executed SPAs with Alpine and the extended period was reflected in the SPAs.

The notice of vacant possession was issued on 11.11.2019 and the purchasers were deemed to have taken possession on 25.11.2019. The completion and delivery of the project were within the 60 months stipulated in the SPAs. However, the purchasers commenced an action against Alpine, contending that the EOT granted was void and that they should be entitled to claim for LAD based on the 36 months prescribed period.

(b) The purchasers, even before the execution of SPAs were fully cognisant that the completion of the project would be 60 months from the date of SPAs. They had never expected to obtain vacant possession within 36 months. The purchasers had also never raised any objections towards the EOT, until after the decision in Ang Ming Lee, post the delivery of vacant possession by the plaintiff.

The High Court also observed that the purchasers in Ang Ming Lee were not informed that after executing the SPAs, the developer applied and obtained an EOT beyond the originally agreed 36-months completion period.

It was held that both Alpine and the purchasers were under the assumption that the EOT was valid. Alpine proceeded and relied on the conduct of the purchasers and believed that the time to deliver the vacant possession was agreed at 60 months. Alpine followed the required steps to apply for the EOT and there was no element of irregularity or illegality.

Based on the above, the High Court held that by applying the doctrine of estoppel by conduct, the purchasers were prevented from denying the terms of the SPAs, as quoted below :

“As such in my view even though there is absolutely no disputing that the Extension is not valid given that regulation 11 (3) has been ruled to be ultra vires, in situations like presently where the modifications such as the Extension was secured prior to the execution of the contract of sale under Schedule H with the purchasers and obtained without any illegality or irregularity on the part of the developer, and there is no concerns about the need to ensure the protection of the purchasers in the SPAs, the doctrine of estoppel by conduct could be applied to prevent the defendants from denying the terms as contained in the SPA”

The High Court dismissed the purchasers’ claim for LAD based on the prescribed 36 months completion time. The case is now pending appeal before the Court of Appeal.

The 3 key takeaways from the cases above are:

(a) Although the Federal Court in Ang Ming Lee ruled that Regulation 11(3) of the Regulations is ultra vires, the Minister of Housing can still grant an EOT to developers by exercising power conferred upon him under the HDA.

(b) The time limited to challenge the validity of a SPA starts to run from the date of the SPA and if 6 years have elapsed, the purchasers’ claim may be time-barred; and

(c) If the developer secured the EOT from the Controller of Housing before the execution of the SPA, the purchaser might be estopped from denying the terms of the SPA and demanding vacant possession after 36 months.