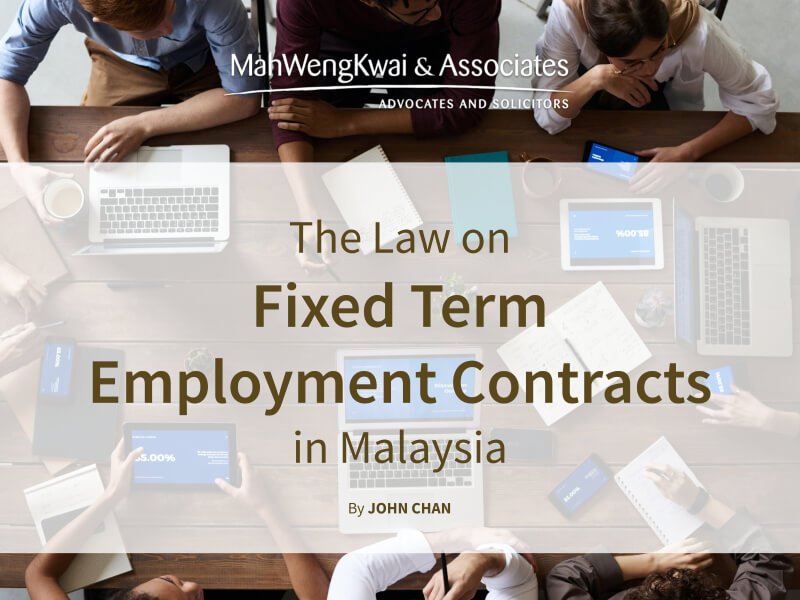 The general legal principle is that the issue of unfair dismissal does not arise at all when a fixed term contract comes to an end and is not renewed by the employer. This is because there was no termination or dismissal by the employer in the first place.

In the case of Marsha Sdn Bhd [2018] ILJU 142, the Industrial Court described a fixed term contract as follows:

“A fixed term contract is one which has a definite beginning and a definite end. In common law, when a contract for a fixed term expires, it terminates of itself: it has not been “terminated” by either party. In the conventional sense, there is neither dismissal nor resignation. This is implicitly affirmed in the Employment Act 1955, Section 11.”

The Industrial Court in Han Chiang School, Penang Han Chiang Associated Chinese Schools Association v. National Union of Teachers in Independent Schools, W. Malaysia [1988] 2 ILR 611, held that in the case of a conventional fixed term contract, “the workman may have a grievance that he has not been hired by his employer under a fresh contract, but ordinarily an employer is not under any obligation in law to enter into a contract. At common law, therefore, there is simply no remedy.”

Is the fixed term contract genuine?

The primary question that the Court will ask and determine is whether the employment contract in dispute is in fact a genuine fixed term contract OR a permanent contract disguised as fixed term instead.

“… there are genuine fixed term contracts, where both parties recognise there is no understanding that the contract will be renewed on expiry. The Court realises that such genuine fixed-term contracts for temporary, one-off jobs are an important part of the range of employment relationships. Some such jobs are found in seasonal work, work to fill gaps caused by temporary absence of permanent staff, training, and the performance of specific tasks such as research projects funded from outside the employer’s undertaking. These are the types of work envisaged in Section 11 of the Employment Act 1955, which may be embodied in contracts of service for a specified period of time. This type of fixed-term contracts are therefore to be differentiated from the so-called fixed-term contracts which are in fact ongoing, permanent contracts of employment.”

Once it is established that there is a genuine fixed term contract, the dissolution of the contract upon the expiry of its fixed term would clearly spell the end of the employee’s tenure with the employer (see M Vasagam Muthusamy v. Kesatuan Pekerja-Pekerja Resorts World, Pahang & Anor [2003] 5 CLJ 448).

The Court of Appeal in Colgate Palmolive (M) Sdn Bhd v Yap Kok Foong [2003] 3 CLJ 9 held that an employee in a genuine fixed term employment contract leaves at the expiration of the fixed term and that is just cause enough for the employer to formally bring an end to their employment relationship.

The Federal Court in the case of Ahmad Zahri Bin Mirza Abdul Hamid v Aims Cyberjaya Sdn Bhd [2020] 1 LNS 494 recently held that the question of whether an employer had a genuine need for the service of an employee for a fixed duration may be divided into the following three considerations:

(i) The intention of the parties;

(ii) The employer’s subsequent conduct during the course of the employee’s employment; and

(i) Intention of the parties

In the case of Han Chiang High School, the school (employer) had employed teachers (employees) on fixed term contracts of two years. Some teachers had taught at the school for more than 20 years and had their fixed term contracts renewed repeatedly during that period. The school then informed a number of teachers, who were members of the Union of Teachers in Independent Schools, that their employment would cease upon the expiry of their fixed term contracts. After the expiry, the teachers proceeded to file representations that they were dismissed without just cause and excuse. The Industrial Court looked into the facts of the case and found that although there might have been a genuine need for fixed term employment contracts when the school was first established in 1951, there did not appear to be such a need when it had been successfully established that some teachers had taught in the school for more than 20 years and had their contracts renewed unfailingly during those years. As such, the Industrial Court held that the fixed term contracts were not applied out of genuine necessity but as a means of control and subjugation of the teachers.

In determining whether a fixed term contract is genuine, the Courts will also consider the employer’s subsequent conduct during the course of the employee’s employment and the employee’s total duration of service with the employer.

In the case Sime UEP Development Sdn Bhd v Chu Ah Poi [1996] 1 ILR 256, the company employed a clerk under a fixed term contract of one year which was then renewed annually for three more years. At each expiration, the company renewed his contract automatically without requiring the employee to apply for such renewals. The Company also gave salary increments to the employee for each renewal of the contract. During his four years of employment, the clerk was involved in various projects. Thereafter, the company did not renew the employee’s contract for a fifth term because there was a slowdown in the company’s business and the last project in which the claimant was involved in had come to an end. The Industrial Court held that the fixed term contracts were not genuine and that the company’s subsequent conduct and the employee’s total period of service in fact show that his employment was permanent.

Other factors that can determine the true character of a genuine fixed term contract may include the nature of the employer’s business operations and the nature of work which the employee was engaged to perform.

In the case of Khairu Norliza Khairudin v Kool Fm Radio Sdn Bhd [2020] 2 LNS 0396, the Industrial Court held that the fixed term employment contract between the radio company and its radio announcer was not genuine. The Court took into account that there was no evidence that the multiple renewals of the employment agreement were intended for temporary purposes. The Court also scrutinized that the company was constantly creating new programmes signifying expansion that required the employee’s role as a radio announcer consistently for a long period of time. The company’s radio broadcasting business was also one that was continuous in nature. In any event, the employee was also doing office work for the company. The evidence also revealed that the employee’s work was taken over by another radio announcer employed by the company soon after and that this nature of work existed even whilst this case was ongoing in Court.

From the above, both employers and employees should always bear in mind that their rights and liabilities are not confined strictly to the terms and conditions of the employment contract alone. The Courts will ensure the protection of an employees’ security of tenure from sham, improper and intricate manoeuvres and devices. Employers should consider seeking legal advice and assistance in reviewing their existing fixed term employment contracts with their employees, especially when deciding whether to renew the said contracts. Similarly with new incoming employees, it is highly advisable for employers to ensure that there is a genuine need to enter into fixed term contracts taking into account the duration, nature of the business and work required of each particular employee.