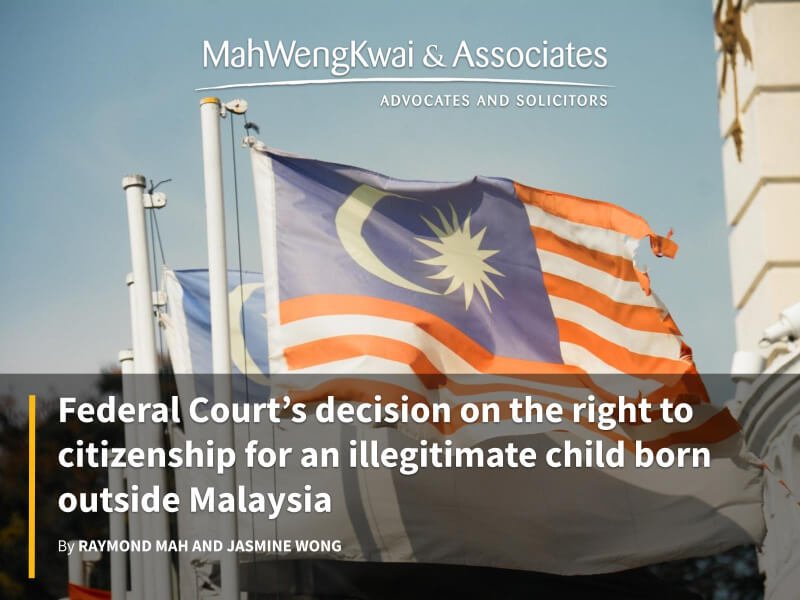 In our earlier article entitled Case Update: The right to citizenship for a child born outside Malaysia published on 11.2.2021, we discussed the case concerning a child’s right to citizenship by operation of law if he/she was born outside of Malaysia to a father who is a citizen at the time of birth. Our Jasmine Wong held a watching brief of the appeal on 4.2.2021 and the decision by the Federal Court on 28.5.2021.

The main issue, in this case, is whether the citizenship provisions in the Federal Constitution allow for the denial of Malaysian citizenship to the child of a Malaysian father and a non-Malaysian mother, on the basis that they were not married to one another at the time of the child’s birth, but five months later.

1. Subject to the provisions of Part III of this Constitution, the following persons born on or after Malaysia Day are citizens by operation of law, that is to say:

The majority decision of 4:3 was delivered orally by Justice Rohana binti Yusuf. The majority held that a child’s citizenship status follows that of the mother, as opposed to the father, when the child is born out of wedlock. This is pursuant to Part III Section 17 Second Schedule FC which provides that in relation to an illegitimate child, any references to the father shall be construed as the mother.

The Federal Court by majority further held that the child’s citizenship status shall be ascertained “at the time of birth”, as opposed to the time of application of citizenship as contended by the child’s counsel. In support of its decision, the Federal Court explained that citizenship by operation of law is acquired automatically at birth without the need for an application for citizenship. Therefore the Government is not given any room to exercise any discretion. The child would have been a citizen automatically as long as the qualifications were met.

On the issue of the gender-bias laws being a form of discrimination allowed by the Federal Constitution, the Chief Justice of Malaysia held that Article 8 does not allow discrimination on the conferment of citizenship. Further, the child’s right to life and liberty in Article 5 of the Constitution must include the right to nationality. Any derogation of liberty must, therefore, be construed narrowly.

The panel of 7 Federal Court judges, however, unanimously agreed that the Court of Appeal had erred in relying on Article 24 of the Federal Constitution to deprive the child of Malaysian citizenship by virtue of holding a Filipino passport. The panel affirmed the position that Article 24 is a citizenship deprivation provision that is applicable only to citizens of Malaysia. The Article had no bearing in this appeal as the child is not a citizen of Malaysia.

At MahWengKwai & Associates, we take the position that the Federal Constitution is a “living piece of legislation” and should not be construed narrowly. The refusal to recognise a father’s right to confer citizenship to his children regardless of his legal marital status creates a gender-bias situation that will place these children at the losing end. By analysing the intention of the drafters for our Constitution, the Courts should interpret Section 1(b) Second Schedule FC liberally. As long as the identity and Malaysian citizenship of the child’s father is ascertained, the child should be automatically recognised as a citizen of Malaysia. After all, the child did not choose to be born as an illegitimate person.

Without reading the provisions of the Federal Constitution harmoniously with the gender equality principle in Article 8(2), Malaysia will continue to remain as:-

On 28.5.2021, the Federal Court released the Grounds of Judgment by Justice Rohana binti Yusuf (for the majority) and the dissenting judges Chief Justice Tengku Maimun binti Tuan Mat, Justice Nallini Pathmanathan and Justice Mary Lim Thiam Suan. The full text of the respective Grounds of Judgment are at the links provided:-

By Raymond Mah and Jasmine Wong