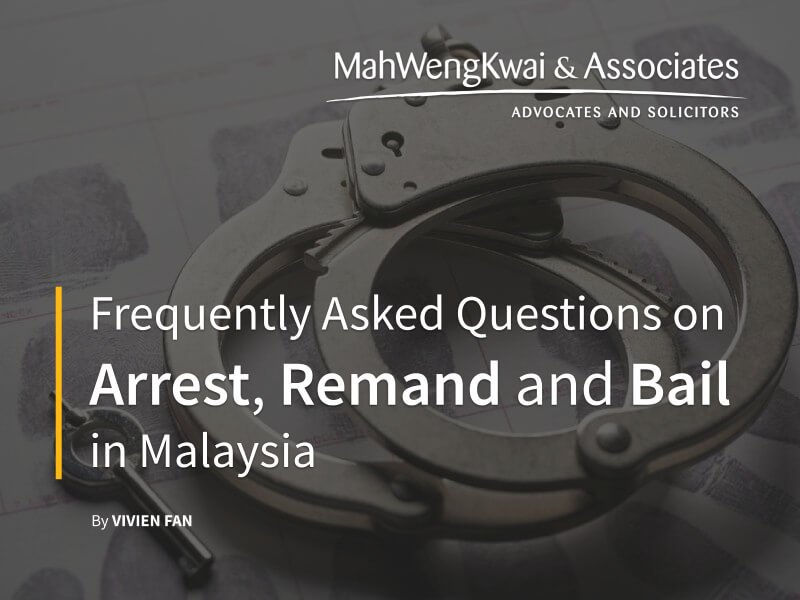 An arrest happens when a police officer (or other persons empowered by the law) touches or confine the body of the person to be arrested or when you submit to custody voluntarily by word or action.

Section 15(1) of the Criminal Procedure Code (“CPC”) provides that: “In making an arrest the police officer or other person making the same shall actually touch or confine the body of the person to be arrested unless there is a submission to the custody by word or action.”

An arrest also occurs when the police officer:

a. Informs you that he is arresting you;

b. Uses force to restrain you; or

c. Makes it clear that he will use necessary force to prevent you from going where you may want to go.

2. How will I know I am under arrest?

In most circumstances, it will be clear that you are under arrest by the common use of handcuffs. However, if it is unclear whether you are being arrested during a prolonged discussion or interview with the police, you should ask the police, “Am I under arrest?”

3. Can the police arrest you without a warrant?

It depends on the offence of which you are suspected. A police officer can arrest you without a warrant if you are suspected of a seizable offence, i.e. an offence which is punishable with death or imprisonment of 3 years and above. [You may refer to the third column of the First Schedule of the CPC]

If you are suspected of an offence which is punishable with a fine only, i.e. a non-seizable offence,  the police cannot arrest you without a warrant. [You may refer to the third column of the First Schedule of the CPC]

4. Can a police officer use force to arrest me?

Section 19(1) of the CPC provides that a police officer may use reasonable force to apprehend you if you resist arrest. However, whether force is required depends on the circumstances, such as whether you are armed and whether you indicate the intention to resist arrest.

5. What are my rights upon arrest?

Your rights upon arrest are stated in Article 5 of the Federal Constitution, which is further codified in section 28A of the CPC.

In summary, you have the right:

a. To be informed of the grounds of your arrest by the arresting officer as soon as may be (either while arresting or immediately after), unless:

b. To communicate with two classes of persons, being your relative/friend and your lawyer of your whereabouts, unless the police reasonably believe that:

c. To consult and be represented by your lawyer at the place where you are detained and within sight of police;

d. To defer any questioning or recording of any statement by the police until the consultation with your lawyer takes place, but only for a reasonable time; and

e. To be brought before a Magistrate within 24 hours from the time of your arrest.

6. What happens after an arrest?

The police may either detain you for only 24 hours (to carry out investigations such as to interview you or take your blood and urine samples for testing) or bring you before a Magistrate to apply for an order to detain you further.

Article 5(4) of the Federal Constitution provides that: “Where a person is arrested and not released he shall without unreasonable delay, and in any case within twenty-four hours (excluding the time of any necessary journey) be produced before a magistrate and shall not be further detained in custody without the magistrate’s authority.”

a. If after 24 hours, the police believe that there is no case against you, then the police will release you. Note that they have the right to arrest/contact you again for further investigation if necessary.

b. If the police believe that they have obtained sufficient evidence to charge you, they will bring you before the Court for you to be charged in Court. You will be brought before a Magistrate, and the charge will be read to you. You will then be asked whether you wish to plead guilty or not.

c. If the police believe that they need to detain you for a longer period for further investigation, they will need to bring you before a Magistrate before the 24-hour period expires, and apply for a remand order, i.e. an order allowing the police to detain you further.

Police bail (also referred to as “jamin mulut”) is the process by which the police releases you from detention, based on your promise to attend Court when asked to. Police bail may be given after your arrest and before being charged in Court.

If you breach the promise and fail to attend Court when asked (or fail to respond to the IO when contacted), the police will likely ask the Court to issue a warrant of arrest. Note that if that happens, it will be difficult for you to apply for bail in Court later, if necessary.

8. What should I say to the police during a police interview?

At the start of your interview, the police are required to caution you that you have the right to remain silent. During the interview, your answers will be taken down in writing by the police. At the end of your interview, the police will have to read the written statement to you in the language in which you have answered, and you will be asked to verify the truth and accuracy of the written statement by signing it. The police will also have to allow you to make corrections before signing.

However, the police cannot detain you merely because they want to take statements from you as a witness. The police can only detain you if you are a suspect to an offence, and the police have reasonable grounds to believe that you have committed an offence.

10. How long can my detention period be extended?

After the first 24-hours, the police can apply to extend your detention period twice and up to 7 days or 14 days in total, depending on the type of offence you are suspected.

a. If the offence is one that is punishable with less than 14 years imprisonment, then, your detention period can be extended to 7 days in total:

b. If the offence is one that is punishable with more than 14 years imprisonment, such as murder for example, then, your detention period can be extended to 14 days in total:

11. What happens once my detention period ends (i.e. the remand order expires)?

At the end of your detention period, the police have to release you or bring you before the Court for you to be charged in Court.

If you have informed your relative or lawyer of your arrest, they should have the details of your arrest and remand (such as the police station you are detained and the name and contact details of the Investigating Officer (IO)).

12. What happens when I am brought to Court to be charged for the alleged offence?

Firstly, the charge will be read to you in a language you understand. If necessary, tell the Court interpreter or the Judge that you do not understand the language used and ask for it to be read in a language which you can understand.

Then you will be asked whether you wish to plead “guilty” or “not guilty”. In Bahasa Malaysia, you will usually hear: “Kamu mengaku salah atau tidak?”.

a. If you plead guilty, the Judge will record the conviction against you and proceed to sentence. During sentencing, you will be allowed to mitigate for a lower sentence.

b. If you plead not guilty, you will be entitled to a trial for the Court to determine whether or not you are guilty of the offence charged against you based on the evidence produced in Court. Once you enter your plea of “not guilty” and claim trial, you will be detained until the next Mention (or your next appearance in Court) unless the Court grants you bail.

Instead of detaining you in prison until the conclusion of your trial, the Court may grant you bail and release you on certain conditions.

Since you are still under detention, you will need to contact someone, for example, your relative, friend or employer, i.e. a bailor, to bail you out.

The Court will usually require your bailor to pay a sum of money into Court as a guarantee (referred to as a bail sum). Your bailor will have to manage the administrative side of things, including attending to the process of depositing the bail sum while you are being detained in Court.

The Court can also impose further conditions such as making it mandatory for you to report to the police station every week and surrendering your passport to the Court for its safekeeping until the end of your case. If the Court imposes the latter condition, you may apply, and the Court in certain circumstances, may allow you to retrieve your passport (and travel out of the country) for a short period of time. In exercising its discretion to do so, the Court will consider several factors, including the seriousness of the offence with which you are charged.

Anyone can be a bailor as long as he/she is 18 years or above. It is advised to seek someone who is a Malaysian citizen as the Court may impose further conditions if the bailor is non-Malaysian.

If the accused is a non-Malaysian, the bailor has to be a Malaysian citizen.

15. What are the responsibilities of a bailor?

The bailor has to ensure that the accused appears in Court on the dates fixed by the Court. The Court will issue a warrant of arrest, and the bailor will be asked to attend Court to explain the accused’s non-attendance if the accused fails to attend as required.

The bail sum deposited by the bailor in Court may also be forfeited during the subsequent non-attendance.

16. Is everyone entitled to be released on Court bail?

a. If the offence you are charged with is a bailable offence, you are entitled to bail. The Court cannot deny you bail (section 387 of the CPC);

17. If the offence is a non-bailable offence, how does the Court decide whether to grant me bail?

Firstly, the Court will have to ask whether the offence you are charged with is punishable by death or life imprisonment.

a. If the offence is punishable by death or life imprisonment, the Court will not grant you bail if the Court has reasonable grounds to believe that you committed that offence unless:

b. If the offence you are charged with is not punishable by death or life imprisonment, the Court will have to decide whether to grant you bail based on several other factors.

The Court will take into consideration various factors, such as the seriousness of the offence, whether there is any flight risk or tampering of witnesses or evidence.

We generally advise that you consult a lawyer as early as possible, such as, as soon as the police contact you to have an interview with you at the police station, or to give your statement for investigation. Certainly, you or your relatives should consult a lawyer upon arrest. It is very crucial that you know your rights and what to say or do. It is equally important to know what not to say or do. Having the right advice at the right time can have a very significant impact on the outcome of the investigations, charge and trial.