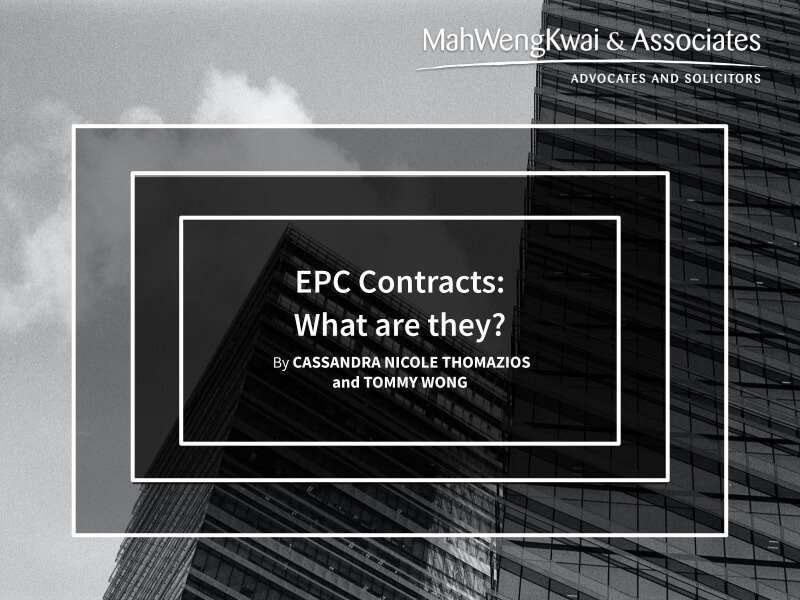 What is an EPC Contract?

There are many companies within the development and infrastructure, renewable energy and power industries that prefer the use of Engineering, Procurement and Construction contracts to manage complex projects. An Engineering, Procurement and Construction Contract (“EPC Contract”), occasionally known as a “Turnkey Contract”, is a construction contract where the contractor (“EPC Contractor”) holds the responsibility towards the design, procurement, construction, commissioning and handover of a project (“Project”).

In any construction contract, the key considerations between the parties lie with the aspects of time, cost and quality. Although FIDIC Contracts are recognised as the international standard for construction contracts and the FIDIC General Conditions of Contract is deemed suitable in all cases, there are certain terms and conditions that the contracting parties should be aware of and consider whether such terms and conditions may be subject to further negotiations.

There are several features in an EPC Contract, one of them being that it is an all encompassing Contract which sets out the scope of work to be carried out with a single point of responsibility (“Works”). Other features include completion details, a guaranteed contract sum and quality within a fixed period. We set out below some of the main features of an EPC Contract and the general terms contained therein.

An EPC Contract requires the Works to be carried out and completed at a fixed price, which means that the EPC Contractor will be responsible for cost overruns and cost savings (“Contract Price”). However, the EPC Contractor may be able to claim additional costs in circumstances where the Employer has caused a delay to the completion of the Project or has placed a change order to the Works. Although it is common for Employers to receive a lump-sum payment, this does not prevent the EPC Contractor from negotiating with the Employer for a schedule of payments to be included to cater for an alternative payment method such as milestone payments.

In most, if not all, construction contracts, it is common that the contractor provides a performance bond to protect the interests of the employer in the event the contractor fails to comply with its obligations under the contract. This is also applicable to EPC Contracts. Performance security may take the following forms:

The concept of handover under an EPC Contract is of fundamental importance given the turnkey aspect. Testing and commissioning are the EPC Contractor’s responsibilities, which are part of the Works, before the handover and completion of the Project. Clauses pertaining to handover, testing and commissioning will set out the procedure as to when the Employer will take possession of the site and the facility constructed.

An example of a “subcontracts and assignment” clause, extracted from the FIDIC Conditions of Contract for EPC/Turnkey Projects, is as follows:

“4.4 The Contractor shall not subcontract the whole of the Works.

A governing law clause is commonly used and allows parties to the contract to specify which country’s law will apply to the interpretation of the contract and determination of any dispute arising out of the contract. It is of particular importance in any contract, especially if a contract involves parties from different jurisdictions.

In the event the Parties fail to resolve such dispute, difference, claim or question by way of negotiations within thirty (30) days from the date of the first negotiation, such dispute, difference, claim or question shall be referred to arbitral proceedings. The arbitral proceedings shall be conducted in accordance with the following manner:

Advantages and Disadvantages to the Employer

Some of the advantages and disadvantages of an Employer in an EPC Contract include the following:

Advantages and Disadvantages to the EPC Contractor

EPC Contract is essentially a form of construction contract that transfers the risks and responsibilities of a Project from the Employer to the EPC Contractor. As the EPC Contractor is provided with a much higher degree of control over the Project, the contracting parties should consider negotiating on the relevant terms and ensuring that the Project’s milestones are clearly set out in the EPC Contract. Although there are various standard forms of contract towards an EPC Contract, the contracting parties should always ensure that all relevant terms and milestones are clearly set out in the EPC Contract in order to cater to their respective business needs and requirements bearing in mind that each project and contract are unique and different. A carefully drafted and reviewed EPC Contract will minimise the risks of future disputes between the parties.