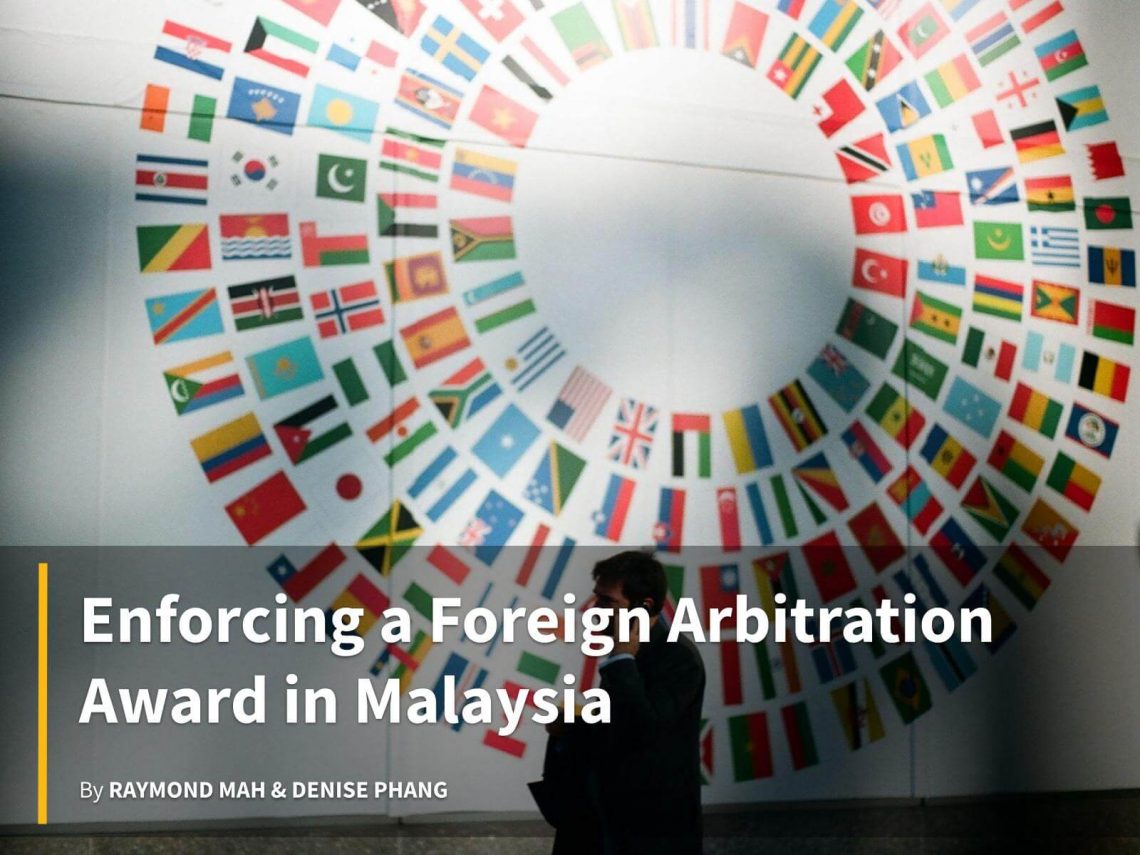 Foreign arbitration awards are not binding and enforceable in Malaysia unless they are recognized as binding and be enforced by entry as a judgment by the High Court.

The Convention on the Recognition and Enforcement of Foreign Arbitral Awards 1958, more commonly known as the New York Convention, is an international agreement entered into by 168 contracting states (as of May 2021) to honour parties’ agreement to arbitrate disputes and to recognise and enforce arbitration awards granted in other contracting states. The New York Convention was adopted by Malaysia on 5 November 1985.

Where a foreign arbitration award is from a state which is not a contracting party of the New York Convention, the party seeking recognition and enforcement cannot rely on Section 38 of the Arbitration Act 2005. In such circumstances, the party seeking recognition and enforcement of the foreign arbitration award in Malaysia will have to sue on the award in an action at common law.

An application for recognition and enforcement of a foreign arbitration award from a contracting party of the New York Convention can be made at the High Court pursuant to Order 69 of the Rules of Court 2012. The application may be made by the party enforcing the arbitration award without giving notice to the other party to the award. However, the High Court retains the discretion to require the enforcing party to serve a copy of the application on the other party.

The following documents are required in an application for recognition and enforcement:

Pursuant to Section 6(1)(c) of the Limitation Act 1953, the time limited for a party to file an application for recognition and enforcement of an award, including a foreign arbitration award is six years from the date of the award.

“[105] In our view, the two-stage process for the enforcement of arbitral awards as contained in ss 38 and 39 of our Arbitration Act (read with O 69 r 8 of the Rules of Court 2012 ) does not permit a party seeking to set aside an order made under s 38 to apply to set it aside under that very section on the ground that there was no arbitration agreement in existence between the parties. That party must apply to set that order aside under s 39.

[106] When the matter moves to the second stage under s 39, the defendant can only apply to set aside the order made under s 38 upon any one or more of the grounds set out in s 39 and no other.”

The purpose of this two-stage process was described by the Court of Appeal in the case of Agrovenus LLP v. Pacific Inter-Link Sdn Bhd & Another Appeal [2014] 4 CLJ 525 as follows:

“[15] We make the observation that the division under ss. 38 and 39 into two stages is to simplify the application for recognition or enforcement of an award and the process of dealing with exercise of discretion to refuse that application. This is consistent with recognition of such arbitrations as a specialised tribunal for resolution of commercial disputes or disagreements by those in commerce.”

Stage 2: Opposing an Application to Set Aside the Enforcement Order

(a)  a party to the arbitration agreement was under any incapacity;
(b)  the arbitration agreement is not valid under the law to which the parties have subjected it or under the laws of the State where the award was made;
(c)  the party making the application was not given proper notice of the appointment of an arbitrator or of the arbitral proceedings or was otherwise unable to present that party’s case;
(d)  the award deals with a dispute not contemplated by or not falling within the terms of the submission to arbitration;
(e)  the award contains decisions on matters beyond the scope of the submission to arbitration;
(f)  the composition of the arbitral tribunal or the arbitral procedure was not in accordance with the agreement of the parties or was not in accordance with the Arbitration Act 2005;
(g)  the award has not yet become binding on the parties or has been set aside or suspended by a court of the country in which, or under the law of which, that award was made;
(h)  the subject matter of the dispute is not capable of settlement by arbitration under the laws of Malaysia; or
(i)  the award is in conflict with the public policy of Malaysia.

The High Court will refuse recognition and enforcement only on the limited grounds as provided in Section 39 of the Arbitration Act 2005. Significantly, the High Court will not inquire into the merits or correctness of the foreign arbitration award (see the case of Murray & Roberts Australia Pty Ltd v Earth Support Company (Sea) Sdn Bhd [2015] MLJU 2319).