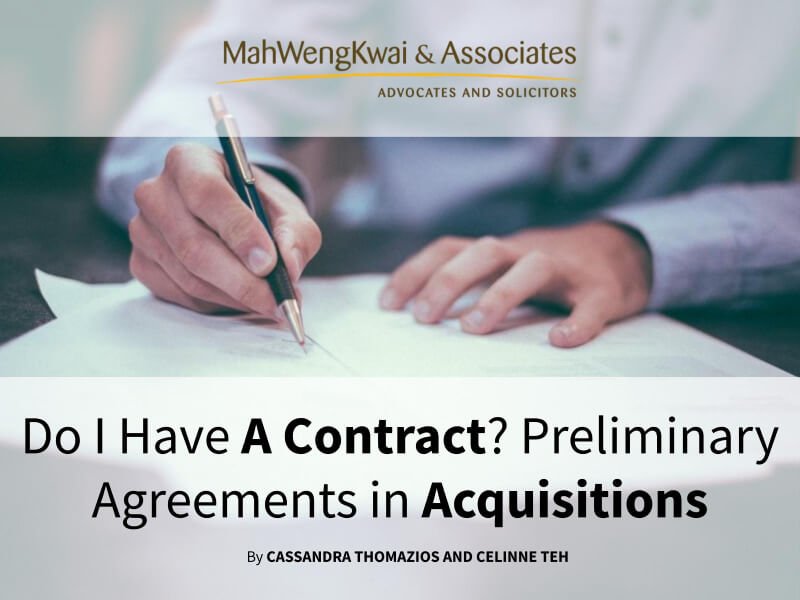 This article seeks to discuss what you should first determine: Is your preliminary agreement a valid and binding contract?

What is a contract?

Section 10 of the Contracts Act 1950 states that a contract is a consensual agreement which is made by parties who are competent to contract for lawful consideration. A valid and binding contract must have, amongst others, the following basic elements:

In addition to the above, a valid and binding contract requires other ingredients, namely, an intention to create legal relations, certainty of terms and capacity to enter into an agreement.

What is a preliminary agreement?

A preliminary agreement is a non-binding document which lays out the framework, proposed terms, and conditions in which the parties are to enter. This document is usually an indication that negotiations have been initiated by the parties and/or that parties are in the final stage of contemplation before the execution of a definitive agreement.

Depending on the subject matter of the agreement, preliminary agreements may be in various forms, including a term sheet, Memorandum of Understanding (“MoU”), Memorandum of Agreement (“MoA”) or Letter of Intent (“LOI”). MOU, MOA and LOIs have been used interchangeably in practice. Other forms of preliminary agreements in an acquisition transaction include exclusivity agreements. The purpose of entering into exclusivity agreements is to prohibit sellers from negotiating with third parties to sell or otherwise deal with the subject matter of the sale for a prescribed period of time. Such an arrangement may also be included as part of a term sheet, MoU, MoA or LOI.

How is a preliminary agreement identified?

Preliminary agreements generally use words and have clauses which indicate that it is not binding upon the parties. Examples of such clauses are as follows:

Preliminary agreements may also contain clauses which indicate that there are certain conditions to be fulfilled prior to the formalisation of a definitive agreement. Examples of such clauses are as follows:

Notwithstanding a few variations, the clauses above suggest that the agreement is “subject to contract”.

I have entered into a preliminary agreement, does this mean that I do not have a legally binding contract?

The general rule is that where a preliminary agreement contains the “subject to contract” clause, it signifies that the parties are in negotiations and do not intend to be bound until a definitive agreement is entered into (Charles Grenier Sdn Bhd v Lau Wing Hong [1996] 3 MLJ 327). However, the Malaysian courts have also established that parties are not automatically bound by the labels affixed on a document. There are exceptional circumstances where a ‘subject to contract’ clause does not prevent the formation of a binding contract (Ayer Hitam Tin Dredging Malaysia Bhd v YC Chin Enterprises Sdn Bhd [1994] 2 MLJ 754). The courts will look into the elements of a contract by establishing whether there is certainty as to the terms and whether there is a meeting of the minds of the parties that a concluded contract was intended (Syarikat Pertanian Emmal Sdn Bhd v Tractors Malaysia (1982) Sdn Bhd [2009] 4 MLJ 223).

This section will explore several scenarios. Although the cases do not specifically deal with acquisitions, the principles would similarly apply in accordance with the type of preliminary agreement entered into.

You received a letter of intent, together with a copy of the draft agreement. However, there were no approvals or signatures on the agreement. Premised on the letter of intent, you started doing works for the other party. When negotiations reached a stalemate, you wrote to claim for a breach of contract.

In its judgment, the court only allowed a claim based on a reasonable sum for work done where the amount due is not stipulated in a legally enforceable contract and the terms in this case clearly stated that Ayer Hitam would undertake to pay YC Chin for “the filling and levelling of the site” which does not exceed RM300,000.00.

You have entered into an MOU with another party for the sale and purchase of certain companies. The MOU contains clauses regarding the essence of time in the contract and states the governing law of the contract. However, you are aware that you still need to obtain various approvals in order to enter in a final contract, and many terms are yet to be negotiated between the parties.

The case of Lim Hong Liang & Anor v Tan Kim Lan @ Tan Kim Leng & Anor [1997] 5 MLJ 157  has a similar set of facts to this. The Plaintiff submitted that certain clauses in the MOU such as time is of the essence of the contract and express governing law clauses gave rise to the enforceable rights of the Plaintiff. While the court acknowledged that although these clauses generally indicate that the MOU is intended to be legally binding, the essence of the MOU itself is construed not to be legally binding as the clauses show that the parties did not intend to create a legally binding contract in view that there are various approvals that still needed to be obtained and terms are yet to be negotiated.

You have entered into a sale and purchase agreement (“SPA”) with another party which states that it is not a concluded agreement until a formal contract is drawn up. However, the price and essential terms were expressly stated in the SPA itself. Further, the correspondences between you and the other party did not mention any terms to be added in/varied on top of the terms already in the SPA.

The scenario above reflects the facts in the case of Charles Grenier Sdn Bhd v Lau Wing Hong [1996] 3 MLJ 327. In this case, Justice Gopal Sri Ram stated that “An agreement to make an agreement does not result in a contract. It is for the court in each case to construe the correspondence exchanged between the parties and to say whether that is the result intended by the parties. If the court reaches an opposite conclusion, then there is an enforceable contract.” The court further held that “This principle applies not only to documents drafted by laymen, but also to those prepared by lawyers.”

The scenario above is reflected in the case of AHT Properties Sdn Bhd (Company No. 460683-X) & Ors v Tan Yee Hee and Ors [2010] MLJU 1597. The court held in this case that there is no evidence from the parties which shows that there is no intention for the confirmation letter to not be a binding agreement, and that it is an “open contract” whereby if acted on before it lapses or is lawfully withdrawn, will result in a binding contract.

There were no additional terms to be formulated for the final agreement and all later amendments made appeared consistent with the sale. Thus, despite there being a final agreement in contemplation by the parties, the court found that the confirmation letter was sufficient to be a valid and binding contract.

There is no fixed set of facts or sequence of events which will lead to the court’s finding that there is a valid and binding contract. As seen above, the courts place importance on whether the essential terms have been concluded, whether the parties have taken the active measures to finalise the agreement and whether there is any objective intention for the agreement to be binding. It is important for parties in an acquisition transaction to ensure that any preliminary agreements are drafted accurately to reflect the intention of the parties. It is becoming increasingly popular for parties in an acquisition transaction to include salient terms under preliminary agreements and proceedings to fulfill such terms of an acquisition transaction based on the preliminary documents before any definitive or final agreement is entered into. In this vein, it is pertinent to ensure that the intention of the parties are reflected, with specific detail as to the wording on whether they intend for such preliminary documents to be binding or not.

By Cassandra Thomazios & Celinne Teh