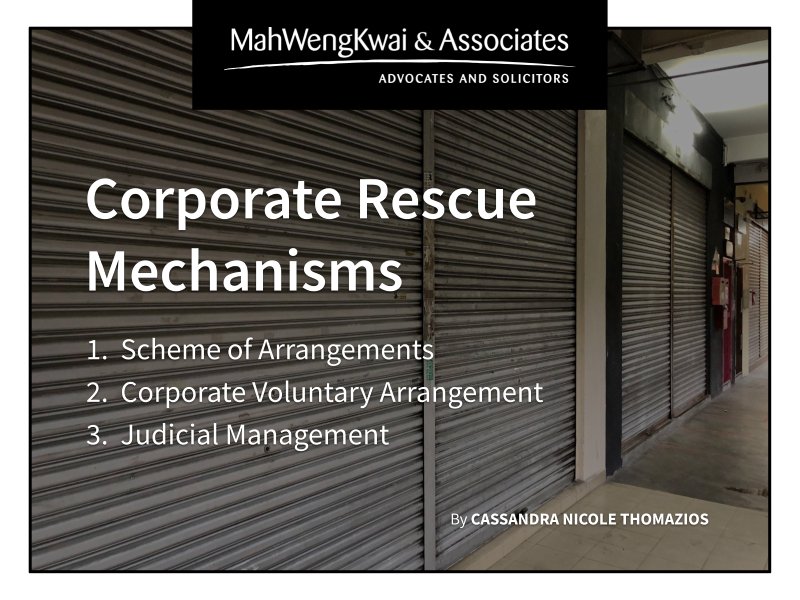 The Covid-19 pandemic and the Movement Control Order have caused distress to many companies due to the suspension of business operations and suppression of consumer demand. In Malaysia, the Companies Act 2016 offers three corporate rescue mechanisms which can be used to avail distressed companies. Corporate rescue mechanisms that are found under the Companies Act 2016 include Scheme of Arrangements, Corporate Voluntary Arrangement and Judicial Management. This article provides an overview of each mechanism and will focus on private limited companies. Division 8 of Part III of the Companies Act 2016 came into force on 1 March 2018, together with the Companies (Corporate Rescue Mechanism) Rules 2018, which aim to facilitate financially distressed companies and rehabilitate business viabilities which provide alternatives to liquidation.

Section 366 of the Companies Act 2016 gives the Court the power to order a compromise or arrangement with creditors and members in the form of an approved debt-restructuring arrangement. The term “arrangement” includes reorganization of the share capital of a company by the consolidation of shares of different classes, by the division of shares into different classes or by both of these methods. The arrangement or reconstruction provisions under Section 366 of the Companies Act 2016 is commonly referred to as “Scheme of Arrangements” and is commonly used by companies to restructure its debt with creditors. The Court may, upon application by either the company, any creditor or member of the company, liquidator (if the company is wound up) or judicial manager (if under judicial management), order a meeting to be summoned in such manner as the Court directs.

If the compromise or arrangement is approved by 75% majority of the total value of creditors or members present and voting and has been approved by the Court, it shall be binding on all creditors, members and the company (or liquidator if the company is wound up). It is pertinent to note that there is no automatic moratorium for scheme of arrangements unlike a corporate voluntary arrangement and judicial management. The equivalent to a moratorium is a restraining order which must be applied to Court. However, the requirements to fulfil for a restraining order is burdensome and difficult to satisfy.

Application for a scheme of arrangement:

Effects of a compromise or scheme of arrangement:

A copy of every scheme of arrangement order made shall be annexed to every copy of the constitution of the company issued after the order has been made.

Public listed companies, license holders or operators of a designated payment system regulated by Bank Negara Malaysia or subject to the Capital Markets and Services Act 2007 and companies with charges over its property are ineligible to undertake corporate voluntary arrangements.

The proposal for voluntary arrangements is prepared by the company’s directors, judicial manager, liquidator or official receiver (as the case may be). The proposal must include (i) nomination of a nominee either as a trustee or supervisor under Section 396(2) of the Companies Act 2016; and (ii) a statement that the company’s information is up to date and that the company is not under any striking off process.

Main documents that should accompany the proposal include the following:

Procedure and effects of a Voluntary Arrangement:

Judicial management allows a distressed company or its creditors to apply for an order to place the company under the management of a qualified insolvency practitioner (“Judicial Manager”). The role of a Judicial Manager is to prepare and table a restructuring plan for creditor’s approval.

Factors the Court will consider for Judicial Management:

(a) That the company is, or is likely to become, unable to pay its debts; and

(b) That the order is likely achieve one or more of the following purposes:

Effects of a Judicial Management Order:

One of the concerns for residents of condominiums, apartments and flats is whether they are…