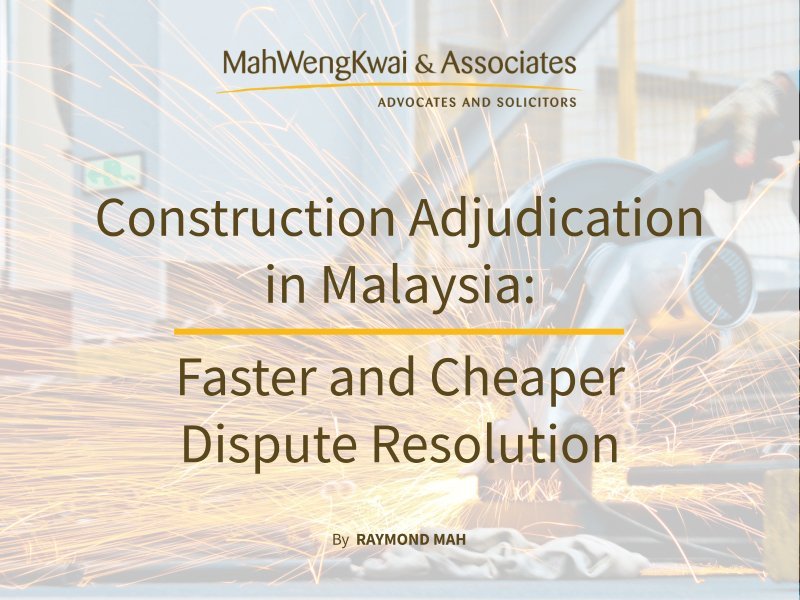 The CIPA Act came into force on 15 April 2014. It is stated in the CIPA Act that its objects are to “facilitate regular and timely payment, to provide a mechanism for speedy dispute resolution through adjudication, to provide remedies for the recovery of payment in the construction industry and to provide for connected and incidental matters.”

The Act applies to every construction contract made in writing, whether made before or after 15 April 2014, relating to construction work carried out wholly or partly within Malaysia, including construction contracts with the Government.1 It does not apply to contracts made by individuals for the construction of a building less than 4 storeys high intended for his or her own occupation.2 There is no mention in the Act as to its application to contracts and/or payment disputes before 15 April 2014. This issue was promptly taken to the High Court3 which held that the CIPA Act applies retrospectively to both contracts and disputes which arose before the 15 April 2014. The Kuala Lumpur Regional Centre for Arbitration (“KLRCA”) as the adjudication authority issued Circular 1A dated 11 November 20144 to implement the retrospective application of the Act.

The Act has a wide application to contracts for the carrying out of construction work, provision of consultancy services and the procurement of materials and labour.

The application is not limited to written contracts, as the definition of “made in writing” adopted by the KLRCA includes contracts which are not signed, made by exchange of communications in writing or evidenced in writing.5

The Construction Industry Payment & Adjudication (Exemption Order) 2014 exempts certain government contracts, including the construction power plants and water treatment plants from coming under the Act. However, the exemptions are read narrowly and only apply to contracts involving the federal and/or state governments. Contracts awarded by government-linked companies (GLCs) such as Tenaga National Bhd (TNB) are not exempt.6

The dispute resolution mechanism under CIPA Act is faster than litigation or arbitration. In theory, the adjudication process could take as little as 100 working days from commencement to decision.

Before an adjudication proceeding is commenced, an unpaid party must first issue a payment claim. A payment claim can be issued for unpaid interim payments, final payments and retention sums, as long as these sums are due under the terms of the construction contract. It may also be issued before certification of the claim.7 A claim for “payment” as de ned in the Act is limited to “payment for work done or services rendered under the express terms of a construction contract”.

Thereafter, either the unpaid party or non-paying party may refer the dispute to adjudication. Upon registration with KLRCA, parties have to agree on the choice of an adjudicator or request the director of the KLRCA to appoint one.

KLRCA maintains a register of adjudicators from which it selects an adjudicator.8 Adjudicators empanelled with the KLRCA must have been trained and certified by the KRLCA, hold a relevant degree or diploma9 and have at least 7 years of actual working experience, preferably in the building and construction industry. The Adjudicator’s fees are to be agreed by the parties, and may be based on the KLRCA Schedule of Fees.10 In the absence of agreement, the lower fees set out in the CIPA Regulations are to apply.11 Upon the adjudicator’s acceptance of his appointment, the adjudication process begins.

Proceedings under CIPAA 2012 are essentially summary in nature, often decided based on documents, saving time and costs.

An adjudication decision is given in writing with reasons. It is binding unless set aside by the high court, settled in writing between parties or finally decided in arbitration or court. It is uniquely described as having “temporary finality”.

Adjudication decisions can be set aside if there are elements of fraud or bribery, when there is a denial of natural justice,12 when the adjudicator has not acted independently or when he has acted in excess of his jurisdiction.

It is not uncommon for parties to promptly comply with an adjudication decision. However, in the case of non-compliance, the successful party has a few options:

(i) He may suspend or slow down work under section 29 of the Act. (ii) He is also able to demand for direct payment from the principal under section 30 of the Act. (iii) Given that the successful party may concurrently exercise the remedies available, he may also apply to court to enforce the adjudication decision and commence execution proceedings, including winding-up proceedings.

Section 20 of CIPA Act provides that adjudication proceedings shall be confidential, although with limitations and exceptions. The requirement of confidentiality applies to both the adjudicator and parties in the dispute, but not to others involved in the proceedings, such as witnesses.

In addition to providing a dispute resolution mechanism to resolve payment disputes, the CIPA Act also provides for 2 incidental but significant matters:

As for the type of adjudication disputes, the majority were for interim payments, followed by claims for final accounts, payment of professional fees and monies which were withheld.15 In line with the purpose of the Act, adjudications under CIPAA 2012 remains mostly a “documents only” proceedings, with 251 matters disposed this way. 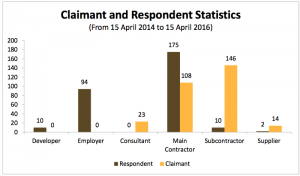 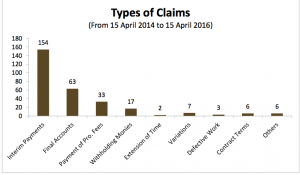 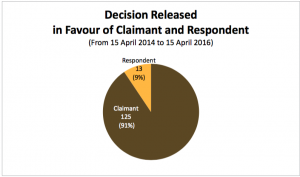 Since its inception in 2014, construction adjudication under the Act has steadily gained traction. As the players adjust themselves to this new regime, we can expect to see improvements to delivery and quality in the construction industry. It is only a matter of time before the positive impact of the CIPA Act will be seen in the real estate market.

(This article was published in the June 2016 issue of the Asian Legal Business Magazine.)

1 Section 2 of the CIPA Act

2 Section 4 of the CIPA Act

4 The KLRCA initially issued circular 01 dated 23 April 2014 which stated that CIPA 2012 applies retrospectively to contracts made before 15 April 2014 but prospectively to disputes which arose after the date.

8 There are currently 363 adjudicators empanelled with the KLRCA. Source: KLRCA

9 In order to attend the KLRCA Adjudication Training Programme, participants must hold a degree or diploma; for example in architecture, building studies, engineering, quantity surveying, environmental studies, law, planning, real estate or urban design, or such other qualification, as may be recognised by the KLRCA.

11 Schedule to the CIPA Regulations 2014: KLRCA’s Standard Fees for Services and Expenses of Adjudicator