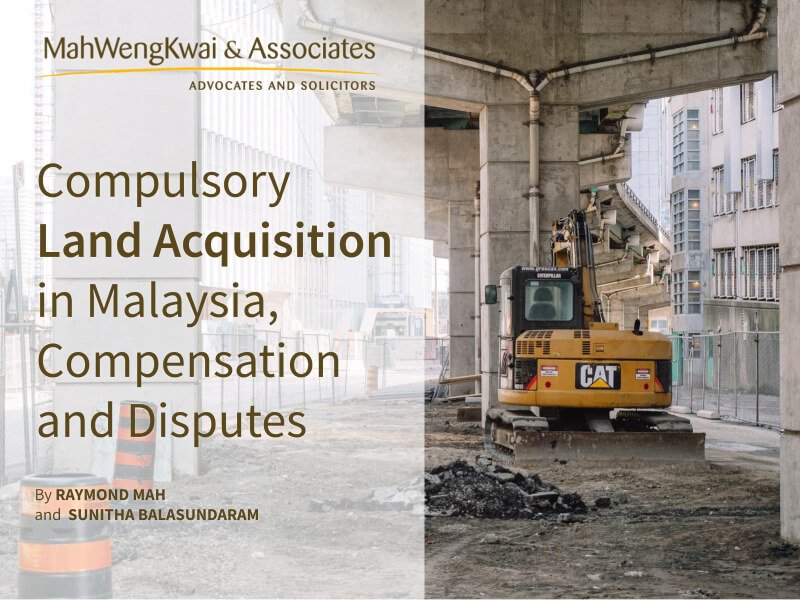 The compulsory acquisition of land is the process by which the government acquires from private landowners their land which is needed for any public purpose or for a purpose beneficial to the economic development of Malaysia. It is a drastic form of governmental intervention as it results in the dispossession and eviction of landowners from their properties.

The compulsory acquisition of land affect the constitutional rights of landowners. It is thus important for landowners to understand their rights so their land rights are protected and adequately compensated.

Background to landownership in Malaysia

Land ownership in Peninsular Malaysia is governed by the Federal Constitution (“FC”), the National Land Code 1965 (“NLC”) and the LAA. Malaysian land law under the NLC is based on the Torrens System, where the register of land ownership is maintained by the government and guarantees an indefeasible title (or undefeatable title) to those owners listed in the register. There are 3 routes to land ownership, namely by dealings (by purchase and followed by transfer and registration at the relevant land registry), through inheritance (from one’s parents or ancestors) and by acquiring it through alienation (state land is “disposed” by way of alienation) from the state.

The NLC recognizes two types of land ownership, namely land held in perpetuity (freehold land) and land held for a term of years (leasehold land). Land ownership has certain duties which are paying the annual quit rent to the state authority and complying with all the express and implied conditions affecting the land. “Express conditions” are specially endorsed or expressed on the land title while the “implied conditions” are those stated in sections 115 (for agricultural land), 116 (for building land) and 117 (for industrial land) of the NLC. Breach of any of these conditions, if not remedied in time can result in forfeiture. The type of land (whether freehold or leasehold) and the express and implied conditions are relevant to the land acquisition process, as the compensation awarded will depend on the character of the property acquired.

Land acquisition in Malaysia can be divided into two main stages. The administrative stage requires all procedural requirements under the LAA to be complied with. If there are any objections or disputes arising from the administrative stage, the matter will proceed to the judicial stage for resolution by the court.

In order for any state authority to lawfully acquire a land, an application is required to be made through Form 1 which is contained in the First Schedule of the Land Acquisition Rules 1998. The purpose of the land acquisition must fall within the categories laid down in Section 3(1) LAA, which states:

(1) The State Authority may acquire any land which is needed :-

(a)  for any public purpose;

(b) for an economic development which is deemed to be beneficial to the public of Malaysia; or

“The expression pubic purpose is incapable of a precise definition. It is still best to employ a simple common sense test, that is, to see whether the purpose serves the general interest of the community”.

Only a “person interested” as defined in Section 2 LAA can claim for and be paid compensation in respect of compulsorily acquired land.

Section 2 LAA defines “person interested” to mean every person claiming an interest in compensation to be made on account of the acquisition of land under the LAA, but does not include a tenant at will who occupies the property on a month-to-month basis without a tenancy agreement or without a Lease.

The land acquisition process involves the submission of the applicable Forms provided in the LAA. These are summarised in the table below:

When the land owner is served with and receives a copy of Form E that informs him that the Government intends to acquire the land, he is required to attend an Enquiry at the Land Office. The land owner should immediately seek the assistance of a lawyer and valuer who are experienced in land acquisition. This is to ensure that appropriate advice on what should be done and how to claim for the best possible compensation is obtained at the very outset.

The land office enquiry will be concluded with a written award in Form G by the Land Administrator pursuant to Section 14 LAA, expressly setting the interest of each person on the land. The award once filed in the office of the Land Administrator will conclude the administrative stage of the land acquisition. Any disputes which arise after the award constitute proceedings of a judicial nature.

Objections to the Award

The landowner must also state the grounds of the objection in Form N. It is important that the grounds are correctly and comprehensively stated as the court hearing will be limited to these grounds. Landowners are highly encouraged to engage lawyers by this stage to avoid any mistakes.

The court hearing is governed by Part V of the LAA (Sections 36-51). A Record of Appeal in Form O will have to be filed by the Land Administrator when referring the objection to the High Court. The landowner is entitled to file its valuation report and affidavits annexing any evidence in support of his case.

The land reference hearing is heard by one High Court judge sitting with two assessors. One of the assessors will be a valuation officer employed by the government while the other assessor will be a registered valuer from private practice.

Based on our reading of the LAA, the High Court judge is to decide on issues of court procedure and questions of law, for example:

The general rule is that the measure of compensation is to be based on the market value of the acquired land. According to the English case of Rickets v Metropolitan Rail Co L.R. 2 H.L. 175 which has been applied by the Malaysian courts, “compensation is the amount required to put the dispossessed landowner in the same position as if his property had not been acquired”.

Matters to be considered in determining Compensation to be paid

Market value is “the price that would be paid by a willing purchaser to a willing seller in circumstances where both parties are actuated by fair business principles and there is no disinclination on the part of the vendor to sell and the purchaser is not compelled by any urgent necessity to buy”.

When assessing the market value of the land to be acquired, it is necessary to take into account the:

(iv)         market conditions at the material date of the valuation.

Where only part of a land is acquired, Paragraph 2(c) First Schedule LAA provides for compensation to be paid for “the damage, if any, sustained or likely to be sustained by the person interested (owner/occupier) at the time of the Land Administrator’s taking possession of the land by reason of severing of the acquired land from the remaining retained land”. This refers to the depreciation in value of the remaining land caused by the loss of the acquired severed portion.

Where only part of a land is acquired, Paragraph 2(d) First Schedule of LAA 1960 provides for compensation to be paid for “the damage, if any, sustained or likely to be sustained by the person interested (owner/occupier) at the time of the Land Administrator’s taking possession of the land by reason of the acquisition injuriously affecting his other property, whether movable or immovable, (including the remaining land) in any other manner”. This may include loss of earnings by a business, reduced utility gained from use of remaining property, etc.

When a landowner is forced to move his residence and/or his business as a consequence of the compulsory acquisition of his land, he is entitled to be compensated for his removal expenses. Paragraph 2(e) First Schedule of LAA 1960 states that “if, in consequence of the acquisition, he is or will be compelled to change his residence or place of business, the reasonable expenses, if any, incidental to such change”.

The provisions of the LAA, in particular sections 40D and 49 severely restrict a landowner’s right to appeal to the Court of Appeal against the decision of the High Court in a land reference. Section 49 LAA states:

(1)      Any person interested, including the Land Administrator and any person or corporation on whose behalf the proceedings were instituted pursuant to section 3 may appeal from a decision of the Court to the Court of Appeal and to the Federal Court:

Provided that where the decision comprises an award of compensation there shall be no appeal therefrom.”

In Calamas Sdn Bhd v Pentadbir Tanah Batang Padang, the Federal Court held that the appeal in a land reference matter to challenge the award of compensation by the High Court was barred by the provisions in sections 40D (3) and 49 (1) of the Act. The Federal Court held that there is no right of appeal in that case because “the issue put forward before the court was whether the learned judge was correct in determining the amount of compensation to be awarded to the appellant”.

Our position, notwithstanding sections 40D(3) and 49(1) LAA, is that a decision on a question of law is appealable to the Court of Appeal. This is because such a decision does not itself “comprise an award of compensation”.

In the Court of Appeal case of Tan Wei Mia & 3 Others v Pentadbir Tanah Daerah Gombak [2013], MahWengKwai & Associates succeeded in setting aside the decisions of the High Court in two related land references. In essence, the Court of Appeal accepted our submission that the High Court judge had erred in finding that the category of land use of the acquired land was agriculture instead of building. Accordingly, the decisions of the assessors were based on an error of law and ought to be set aside. The Court of Appeal directed that the land reference was to be reheard before a new panel of judge and assessors.

Land acquisition is a complex and time-sensitive process in which knowledge and experience are essential to safeguarding the landowner’s rights. Delays and errors can result in great losses and are best avoided at the outset.

Our team of lawyers at MahWengKwai & Associates look forward to working closely with landowners and valuers to ensure their lands are protected and that fair and adequate compensation is paid by the government.

By Raymond Mah and Sunitha Balasundaram 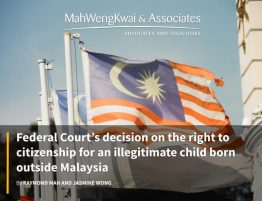 In our earlier article entitled Case Update: The right to citizenship for a child born… 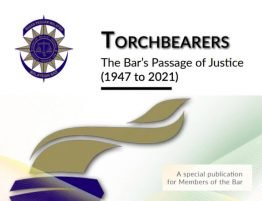 The Bar Council of Malaysia has recently published its First Edition of “Torchbearers: The Bar’s… 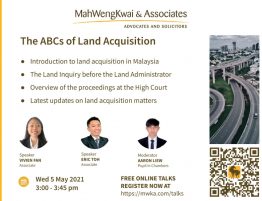 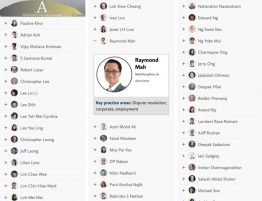