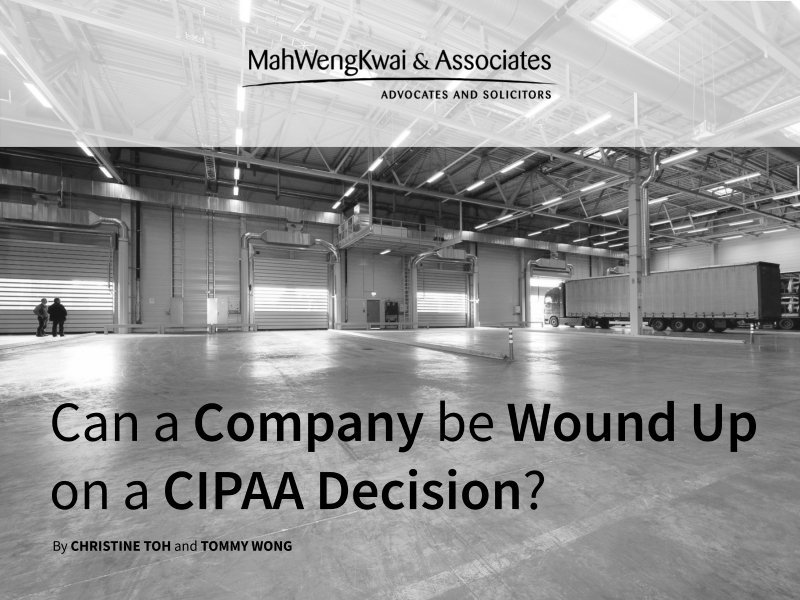 The Court of Appeal in Likas Bay Precinct Sdn Bhd v Bina Puri Sdn Bhd [2019] 3 MLJ 244, held that a successful claimant in adjudication proceedings is not required to enforce the adjudication decision before issuing a statutory notice of demand. However, in ASM Development (KL) Sdn Bhd v Econpile (M) Sdn Bhd [2021] 8 MLJ 99, the High Court recently allowed the plaintiff’s application for a Fortuna Injunction, which restrained the successful party in a CIPAA proceeding from presenting a winding-up petition against the losing party who failed to pay the adjudicated sum pursuant to the CIPAA decision.

This article summarizes the decision of the High Court in ASM Development regarding the nature of an adjudication decision and whether a losing party can resist a winding-up petition if it fails to pay the adjudicated sum.

[Update] The Court of Appeal in Sime Darby Energy Solution Sdn Bhd (formerly known as Sime Darby Offshore Engineering Sdn Bhd) v RZH Setia Jaya Sdn Bhd [2022] 1 MLJ 458 took the position that until and unless an adjudication decision is set aside, it can be in law form the basis for the statutory notice or petition under section 466 of the Companies Act 2016. Hence, the Court of Appeal allowed the appeal where the Fortuna Injunction granted by the High Court was set aside. Please refer to our case update here.

1. ASM Development (KL) Sdn Bhd is a building contractor (“ASM Development”) that appointed Econpile (M) Sdn Bhd (“Econpile”) as the main contractor for a construction project. Disputes arose between the parties and Econpile commenced adjudication proceedings pursuant to CIPAA 2012. Econpile’s payment claim was for a total sum of RM74,887,164.34.

3. In relation to the CIPAA proceedings, the Adjudicator decided in favour of Econpile and decided that ASM Development shall pay Econpile the following:

(hereinafter collectively referred to as “the Adjudication Decision”).

4. Four days after the delivery of the decision by the Adjudicator, Econpile served on ASM Development a statutory notice of demand under section 466(1)(a) of the Companies Act 2016 for payment of the amount owed to Econpile pursuant to the Adjudication Decision.

6. ASM Development filed an originating summons against Econpile, which prayed for an injunction to prohibit Econpile from the presentation or filing of any winding-up proceedings (“Fortuna Injunction”).

8. On 12.2.2020, the High Court allowed ASM Development’s application for the Fortuna Injunction where Econpile was restrained from presenting a winding-up petition against ASM Development.

When it comes to the issue of “irreparable damage”, there are two possible situations when an injunction may be issued to restrain the presentation of a winding-up petition, which are as follows:

Is an adjudication decision which has been ordered to be enforced, disputable?

The learned High Court judge made reference to the case of Pacific & Orient Insurance Co Bhd v Muniammah Muniandy [2011] 1 CLJ 947, wherein Ramly JCA found that as far as a judgment debt of a court of law is concerned, it cannot be regarded as a disputed debt:

“[29] … A valid and enforceable judgment of the court as in the present case, (unless set aside or stayed) cannot be considered as a disputed debt. The law is settled on this point. Therefore, an order for injunction as prayed for by the appellant in the present case, also cannot be granted under this principle.”

“Enforcement of adjudication decision as a judgment

(3) The order made under subsection (2) may be executed in accordance with the rules on execution of the orders or judgment of the High Court.”

Mode of Enforcement Allowed under Section 28 of CIPAA

The High Court contrasted the wordings used in section 28 of CIPAA and section 38 of the Arbitration Act 2005 (“AA 2005”), being the statutory provisions in relation to the enforcement of an adjudication decision and arbitration award respectively.

Section 28 of CIPAA provides that a party may “… enforce the adjudication decision as if it is a judgment or order of the High Court”, whereas section 38 of AA 2005 provides that an arbitration award is to be enforced by entry as a judgment in terms of the award:

A CIPAA decision enforced under section 28 of CIPAA is not a judgment of the Court, but section 28 provides for the enforceability or enforcement of the adjudication decision “as if it is a judgment by various modes of enforcement under Order 45 of the Rules of Court 2012 such as enforcement by way of a writ of seizure and sale, garnishee proceedings, an order of committal, charging orders and the appointment of a receiver”.

However, it does not include a statutory right of enforcement by way of winding up proceedings simply because the presentation of a winding-up petition is not a mode of enforcement or execution under Order 45 of the Rules of Court 2012.

The High Court examined the facts of the case and noted the following:

In light of the above, the High Court Judge held that “there are disputes and arguments against each party‘s claims. However, based on the evidence made available, I am of the view that the Plaintiff‘s disputes of the Defendant‘s claims allowed by the Adjudication Decision and its counterclaims and/or set-offs, save for its claim of RM1,524,735-62 allegedly based on the Block Purchase Agreement, are bona fide and upon substantial grounds.”

Distinguishing the case of Likas Bay

In the case of Likas Bay, Bina Puri obtained an adjudication decision against Likas Bay, and thereafter served a statutory notice of demand on Likas Bay. As Bina Puri contended that Likas Bay had neglected and/or failed to satisfy the adjudicated debt stipulated in the statutory notice of demand, Bina Puri presented a winding-up petition against Likas Bay on the grounds that Likas Bay was unable to pay its debt and it was just and equitable for Likas Bay to be wound up. The High Court granted the winding-up order, which was subsequently appealed to the Court of Appeal.

In the case of ASM Development, the learned High Court judge made a clarification towards the decision in Likas Bay, to which he clarified that winding-up proceedings can still be commenced based on a debt that arose out of an adjudication decision provided that there is no genuine dispute towards the adjudication dispute. If there is a genuine dispute, an injunction may be allowed to restrain the presentation of a winding-up petition and the application will be subject to the principles referred to in the case of Fortuna Holdings Pty Ltd v The Deputy Commissioner of Taxation of the Commonwealth of Australia [1978] V.R. 83.

The High Court also found that Econpile’s threat to commence winding-up proceedings against ASM Development was made in terrorem (by way of a threat) in order to secure payment of the Adjudication Decision.

In light of the above, the decision of the High Court in ASM Development (KL) Sdn Bhd v Econpile (M) Sdn Bhd (Case No. WA-24NCC-363-07/2019) does not contradict the decision in Likas Bay.

The case of ASM Development (KL) Sdn Bhd v Econpile (M) Sdn Bhd (Case No. WA-24NCC-363-07/2019) is currently subject to an appeal to the Court of Appeal. As such, there is a possibility that the High Court judgment may be overturned.

Should there be any questions on the above, please do not hesitate to contact us by sending us an enquiry here or an email to us.

By Christine Toh and Tommy Wong